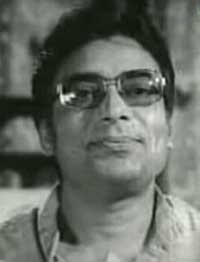 Noted actor and director Dilip Roy passed away in Kolkata on 2nd September, 2010, at the age of 78 years. He was born on 17th December, 1930 in Chittagong in Bangladesh.

His brother introduced him to director Sunil Ganguly who gave him a break in the film Sati Behula in 1953. He had a very good voice and got opportunities to act in landmark films directed by eminent director Tapan Sinha including Hansuli Baker Upakatha, Jhinder Bandi, etc.

He at the same time got roles in other films like Shilubari, directed by Pijush Bose, Arogyo Niketan, Rajodrohi, etc. In the second half of his career he developed his skills as a director and directed many landmark films.

He made two films with Uttam Kumar, that was Devdas and Darpachurna. Devdas did not do great business. Reasons were obvious, the viewers could not accept any other actor in the role of Devdas other than Dilip Kumar who brilliant performance in Bimal Roy’s Devdas in 1955 had became immortal over the years. Uttam Kumar played the role of Chunilal in the film. Although Devdas did not impress the viewers, his other film Darpachurna was well appreciated.

In the early 80s, Dilip Roy made the best film of his career titled Amrito Kumbher Sandhane. He worked on the classic literature of Samaresh Bose on the subject. The film was related to the painful experiences of devotees who had gone to give the holy dip in the Prayag Sangam in Allahabad during the Kumbh Mela and died or lost their relative in the process. The fair took an ugly and people got trampled. Actor Subhendu Chatterjee was given the main role who was the observer and realized that the effect of the sacrifice was not sweet called Amrit instead it was labanakto or full of salt.

He also directed the film Garam Bhaat with actor Santu Mukherjee in the mid-80s. He acted in many commercial films like Sunayoni, Shatru, etc., and in a career of more than 100 films, he had been remembered as a character artist who was thoughtful in his performance. The viewers owe their homage to the great director and thoughtful actor.
Posted by Souvik Chatterji at 6:18 PM