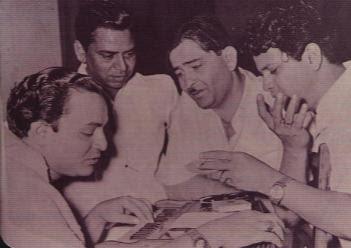 The country remembers romantic writer and poet Shailendra on his birth anniversary on 30th August, 2010. He was one of the legendary lyricist of the golden age and glorified the music of RK films and Shankar Jaikishan with his romantic words.

He was also known as Shankardas Kesarilal and born in 1923. He was an employee of Indian Railways. He started his career with Raj Kapoor in the film Barsaat in 1949. The two songs that he wrote which were composed by Shankar Jaikishan included “patli kamar hai” and “barsaat me”. Both became super hit. From that time onwards the great combination of Raj Kapoor, Shailendra, Hasrat Jaipuri and Shankar Jaikishan blossomed and ruled bollywood film industry for the next 20 years.

Shailendra won the filmfare award for the best lyricist in 1958 for his brilliant lyrics “yeh mera deewanapan hai” composed by Shankar Jaikishan in Dilip Kumar’s film Yahudi. The tragic song was sung by Mukesh. In 1959, he won the filmfare award for the best lyricist for the epic lines in Raj Kapoor’s film Anari, titled “sab kuch seekha humne na sikhi hoshieri”. Each and every song in the film was an asset and the film ended up being super hit. The tune was again composed by Shankar Jaikishan.

Shailendra was instrumental in the success of Raj Kapoor’s comedy films Shree 420. His songs “ramaiya vastamaiya”, “mur murke na dekh”, “mera joota hai japani”, became trend-setters in the mid-50s. Shailendra received filmfare for the best lyricist again for the lines “mai gayoon tum so jayo” in Shammi Kapoor’s film Brahmchari in 1968.
Basu Bhattacharya’s film Teesri Kasam was produced by Shailendra in 1966. Raj Kapoor and Wahida Rehman acted in the film and it was critically acclaimed. All the songs in the film composed by Shankar Jaikishan became super hit including “duniya bananewale”, “sajan re jhoot mat bolo”, to name a few. Even his songs in Raj Kapoor’s Sangam was unforgettable including “dost dost na raha”.

The contribution of Shailendra was so huge, that it is difficult to highlight the great work of the legendary poet in a small article. In 1966, unfortunately the great poet died, and his pen stopped pouring fragrance in the life of Indians with his romantic thoughts and expressive words. His films and lyrics should be preserved and restored.
Posted by Souvik Chatterji at 9:51 PM