Lafangey Parindey will do well. 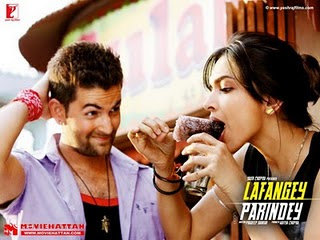 Lafangey Parindey will do well.

The film Lafangey Parindey directed by Pradeep Sarkar and slated for release in middle of August, 2010 will do well. The film had been produced by Aditya Chopra.

For a long time the Yash Raj Banner had not given hit films. The film was related to the story of bike gangs in the area. Neil Nitin Mukesh played the role of Nandu, who fought it out against other bikers in the area.

Deepika Padukone played the role of a dancer Pinky Palker, who had danced with roller skates in her feet. She exhibited the ambitious attribute of the respective character. Both Neil Nitin Mukesh and Deepika Padukone contributed in each other’s life.

The music of the film had been composed by R. Anand. In the film Deepika Padukone and Neil Nitin Mukesh exhibited romantic performance and convinced the viewers about their acting performance. The film had a lot of significance in the career of both the actor and actresse.

Although Deepika Padukone had a lot of success in her career till now right from Om Shanti Om to Bachhna Aye Haseeno and House Full, Neil Nitin Mukesh still requires hit films to cement his position in bollywood. His performance in the film New York had been appreciated by the viewers. Besides he has a number of releases in the pipeline in 2010. The song “man lafangey” sung by Mohit Chauhan and “nain parindey” by Shilpa Rao had been impressive.

The film has a good story and will entertain the viewers.
Posted by Souvik Chatterji at 7:56 PM