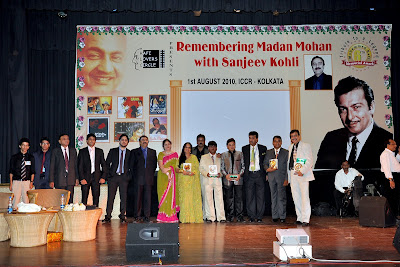 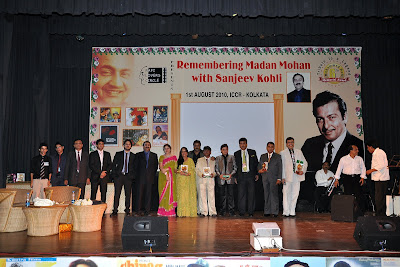 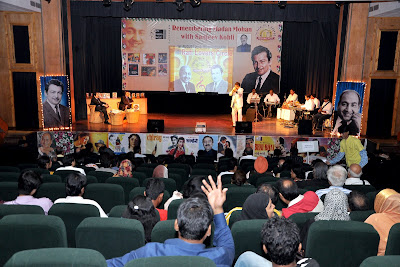 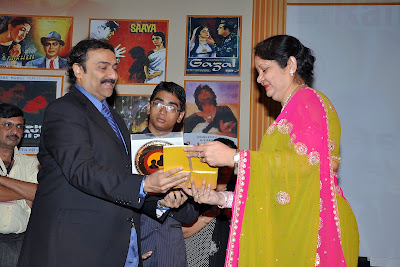 Preceding the Award presentation, was the screening of a 20 minute exclusive Film Meri Awaaz Suno conceived and produced by by Madanji's illustrious eldest son Mr Sanjeev Kohli, the erstwhile GM of HMV ( EMI India ) and the creator of the popular HMV / Sa Re Ga Ma music Cd's and Cassettes. in the Legends, Golden Collections, Revivals and Anmol Ratan . Connoisseurs of Hindi film sangeet will recognise this as a veritable treasury of timeless music and evergreen songs.

The Rafi Lovers Circle headed by Founder President, Ruhi Khan, instated this award from 2005, and awards it to a music personality who has worked closely with Rafi Saab. Earlier receipients have included composers Ravi and Omi ( of Sonik- Omi ), Singers Sharda, Mubarak Begum and a postumous honour for Mahendra Kapoor, recived by his son Ruhan Kapoor. Considering the fact that Rafi Saab worked closely with Madanji from his 1st film Ankhen to his last unfinished work, Laila Majnu, it was indeed an ardous task of honouring these stalwarts with dignity and honour. The committee rose as one and very soon the 6th Mohammed Rafi Memorial Award
was being recived by Mr Sanjeev Kohli.

Post award, Sanjeev ji spoke from the heart about the recognition denied to Madanji both by the industry - Not a single Filmfare Award -inspite of a string of chart busters, and also from the Govt of India, who did not honour Madanji even with a Padma Shri, perhaps because he was an upright honest man who refused to pamper the egos of the decision makers. He pleaded to music lovers to always give good music composer, or singer his due during his lifetime. He said he was very happty to be in Kolkata with his son, Akshay Kohli and was delighted to receive the award on his behalf of his father, who passed away at the young age of 51. He thanked the circle President for inviting him to Kolkata and requested all music lovers in the audience to support organisations like Rafi Lovers Circle, who are constantly making an endeavour to revive / recreate that golden songs of yesteryears.

The evening ended with a soft ballad wafting in the background, an ode to the titans.
The title number, from the unreleased collection of Madanji songs all in 1 cd / casste, tiltled Tere Baghair.
..........Kaise Kategi Zindagi, Tere Baghair, Tere Baghair.
The awaaz, unmistakeably Mohammed Rafi Saheb.
The music, Madan Mohan Sb all the way,