Ghare Baire was a bold project of Satyajit Ray. 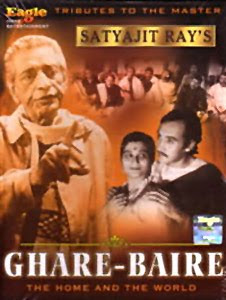 Ghare Baire was a bold project of Satyajit Ray.

The film Ghare Baire had been a bold project of the director Satyajit Ray. The literature was classic in nature and the work of Nobel winner Rabindranath Tagore. Ray wanted to make the film in the early 50s, but changed his mind and made it in 1984.

Victor Banerjee played the role of the zamindar Nikhilesh in the film. He married Sathilekha Sengupta, (the wife renowned theatre personality Rudraprasad Sengupta) in the film. Victor Banerjee taught his wife English music and gave all the luxuries of life. She learned music from British singer played by Jennifer Kapoor.

But Soumitra Chatterjee came to their house and disturbed the peace in the family. He was a freedom fighter in the wrong sense. He believed in swadeshi, yet could not live without English cigarettes. He was characterless in the truest sense of the term. His only intention to stay in the house of Victor Banerjee was to come close to his wife during a period when Indian women generally remained indoors.

Victor Banerjee’s villagers were poor muslims, who sold foreign products in the local market called haat, and could not afford to sell Indian products which were costly. Soumitra deliberately bribed few local people to extort the products and burn them. Victor Banerjee on the other hand, made swadeshi factories, where the employees made soap, towel, and other products. He never wanted publicity for his sacrifices.

Manoj Mitra, his teacher and resident in the same village, countered Soumitra for his hypocrisy and failture of his freedom movement. At the end of the film Soumitra was successful to create riot in the village which was previously peaceful. He kissed Sathilekha Sengupta and continued with his extra-marital affair. While Victor Banerjee went on horseback to prevent the riot and got killed in the process, Soumitra escaped from the place and went to Kolkata after taking the money for the journey from Sathilekha Sengupta. Even the career of the scholarly student of the village was also ruined by Soumitra, who joined the movement and left studies.

Rabindranath Tagore was very bold enough to show the lack of commitment of certain section of freedom fighters who made the movement weak. Satyajit Ray was bold enough to show whenever over-independence was given to household women, they abused it. Besides kissing scenes were not very common in Bengali cinema of the early 80s, in that perspective also the depiction of Soumitra’s extra-marital affair was very bold approach of Ray.

Victor Banerjee was brilliant in his individual role. Sathilekha did a fair job. Soumitra Chatterjee showed the adulterous scenes in style. The film should be preserved and restored.
Posted by Souvik Chatterji at 8:59 PM