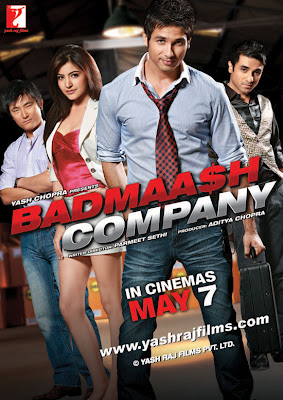 The film Badmash Company, which had been released very recently, is doing great business. It had been directed by Parmeet Shetty and produced by Aditya Chopra.

Four youngstars namely Shahid Kapoor, Anushka Sharma, Meiyang Chang and Vir Das wanted to start a business after graduation. Their idea was to smuggle foreign goods and bring them in India and avoid heavy import duty.

Shahid Kapoor was later arrested and imprisoned for 6 months. After he came out of prison he led an honest life. Anushka was carrying Shahid Kapoor’s child and then mitigated the differences. Chang and Vir Das also returned. At the end of the film they started a public sector company named “friends and company”.

The music of the film had been composed by Pritam. Recently Shahid Kapoor, Anushka Sharma, Vir Das and Chang came to Indian Idol show to promote their own film. Chang was well received by the judges Anu Malik, Sunidhi Chauhan and Salim Merchant as he was one the finalists in Indian Idol Show held in previous years.

The songs “badmash company” sung by Benny Dayal, “chaska” sung by Krishna, “fakeera” sung by Rahat Fateh Ali Khan, had become very popular. Shahid Kapoor is having a dream run from the time of acting in the film Kaminey.

He had continued the successful run in 2010 with the hit film Badmash Company. The viewers expect him to do even well in the films in future.
Posted by Souvik Chatterji at 6:48 AM