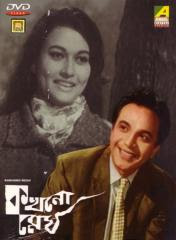 Anjana Bhowmick was considered to be sweet actress of Bengali films of 60s and 70s. Born on 30th December, 1944, in Coochbehar, Arati Bhowmick better known as Anjana Bhowmick passed her higher secondary education from Suniti College in Coochbehar. Her father Bibhutibhushan Bhowmick send her to Sarojini Naidu College later.

She started her film career in the film Anushtup Chanda in 1964 directed by Pijush Bose. But she attracted the attention of the viewers in Uttam Kumar’s film Thana Theke Aschi. She along with her family members compelled Madhabi Mukherjee in the film to commit suicide.

She acted the heroine of Uttam Kumar in the film Rajodrohi in 1966. Uttam Kumar gave excellent lips in Shaymal Mitra’s son “kothao amar nei chola thamar”. Anjana Bhowmick’s performance opposite him was absolutely effortless, without any mannerism. The film became super hit.

Gradually leading directors started pairing her opposite Uttam Kumar. Both Nayika Sangbad and Kakhono Megh became super hit. In Nayika Sangbad, Uttam Kumar, the station master fell in love with a film actress played by Anjana Bhowmick. Her train left her, but the hospitality provided by Uttam Kumar persuaded Anjana Bhowmick to accept him as her husband. Sandhya Mukherjee’s hit songs “keno e lagan chanchal holo”, “ei mishit dekho mishti” were picturised on Anjana Mukherjee. Kakhono Megh was a crime thriller directed by Agradoot. Her uncle had a smuggled good which was wanted by Kali Banerjee. He tried to kill Anjana Bhowmick but was saved by Uttam Kumar at the end of the film.

The biggest hit of Uttam Kumar and Anjana Bhowmick came in 1968. The film Chowrangee, directed by Pinaki Mukherjee stormed Bengali films. Uttam Kumar played the role of the receptionist of Grand Hotel in Calcutta. He fell in love with Anjana Bhowmick, an air-hostess. But before both got married, Anjana Bhowmick died in flight crash during her last journey. Manna Dey’s song “meghero khela akasho pare” picturised on Uttam Kumar ended up being one of the best songs ever sung in pensive mood.

Anjana Bhowmick acted in other films opposite Uttam Kumar like Sukh Sari, Roudra Chaya. Anjana Bhowmick married Naval officer Arun Sharma, and left films in mid-70s. She is adored by a majority section of Bengali audience even today. Her films should be preserved.
Posted by Souvik-indrajalik at 5:30 PM