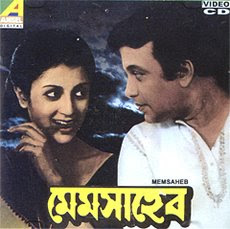 The film Memsaheb, released in early 70s was well directed by eminent director Pinaki Mukherjee. Pinaki Mukherjee became extremely popular amongst intellectuals of Bengal after making the film Chowrangee. Chowrangee was the story of Sata Bose, a brilliant receptionist narrating the story of Grand Hotel during the early 60s. Uttam Kumar’s film released in late 60s ended up being a blockbuster.

The story of Memsaheb was written by Nimai Bhattacharya. The film was made at the backdrop of Bangladesh independent movement. Bangladesh formed part of Pakistan till the early 70s. As East Pakistan, the citizens were unhappy and wanted to sever ties with Pakistan. Indira Gandhi, the Indian Prime Minister during the early 70s, send Indian armed forces to help the Bangladesh citizens to fight out for independence. Bangladesh became an independent nation after the war.

Uttam Kumar was a journalist in the film who fell in love with a simple middle-class Bengali girl played by Aparna Sen. Aparna Sen was brought up by his uncle Bikash Roy. She became a Professor of History and inspired Uttam Kumar to be ambitious.

Uttam Kumar got promoted from staff reporter to main reporter, but the newspaper agency in Kolkata during the naxalite period did not do good business. So a number of staff lost jobs due to the company’s inability of paying them. Uttam Kumar also lost his job. Aparna Sen gave her savings to Uttam Kumar to re-establish himself as a journalist by settling in New Delhi.

Uttam Kumar joined a profitable newspaper agency and came to meet the political stalwarts. He got the assignment of covering the Bangladesh war. Both Uttam Kumar and Aparna Sen decided to marry each other after Uttam Kumar returned back to India after the War ended. But at that time, while invigilation relating to exams were in process in a college in Kolkata, Aparna Sen was killed by the bullet of naxalite. The film ended with a tragic note.

The music of the film composed by Ashima Bhattacharya was very impressive. Rabindrasangeet was sung by Ashima herself and Sailen Mukherjee. Manna Dey’s song “aaj khushi” became a big hit. The credit for the success of the film goes to director Pinaki Mukherjee, as he directed the film very well. The film should be restored for the realistic story, brilliant direction and powerful performances of Uttam Kumar and Aparna Sen.
Posted by Souvik Chatterji at 6:43 AM