Tapen Chatterji had been remembered on expiry. 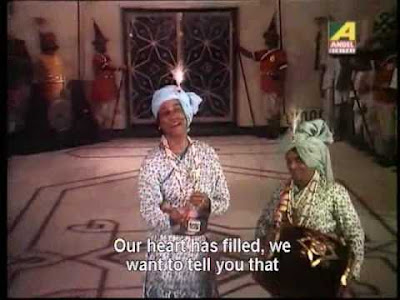 Tapen Chatterji had been remembered on expiry.

He was an automobile engineer. He worked in Bikaner in Rajasthan for some time. Poet Subhas Mukherjee took Tapen Chatterji to the office of Sandesh Publication House. Sandesh was edited by Satyajit Ray at that point of time.

Gupi Gayeen won national and international awards under different categories. Satyajit Ray again did cast him again in the film Hirak Rajar Deshe in 1980. Again he played the role of Gupi Gayeen along with Robi Ghosh playing the role of Bagha Bayeen. In Gupi Gayeen Bagha Bayeen, Tapen Chatterji stopped Jahar Ray from attacking Shundi kingdom and killing Santosh Dutta. In Hirak Rajar Deshe he brought the end of the evil regime of Utpal Dutta who played the role of Hiraker Raja.

But apart from Satyajit Ray’s Gupi Bhagha series, he did get chance only in very few landmark films. One of them included Arobindo Mukherjee’s film Dhanni Meye. Uttam Kumar played the lead role in the blockbuster released in 1971. Tapen Chatterji played the role of the brother in law of Uttam Kumar and gave able lips in Manna Dey’s song “sab khelar sera bangalir tumi football”.

Tapen Chatterji’s other notable films included Sadhu Judhisthirer karcha, Shriman Prithviraj, etc. But viewers remember the tall actor in the immortal role of Gupi Gayeen. Children all across the country mourn the death of their larger than life character gupi gayeen, who had come out of child literature and made the character immortal. Tapen Chatterji’s soul should rest in peace.
Posted by Souvik Chatterji at 6:08 AM