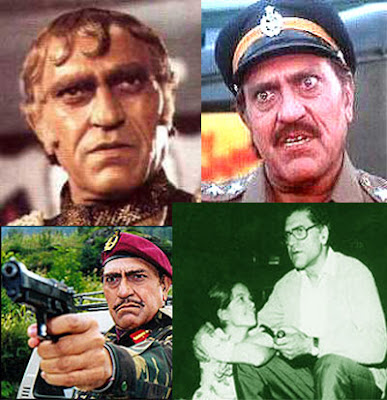 The viewers of bollywood films provide their best wishes and wish happy birthday to Amrish Puri on 22nd June 2010. Amrish Puri died few years back and bollywood industry lost one of its indispensable actors ever.

His voice had an universal appeal and initially Amrish Puri was associated with realistic films directed by Shyam Benegal, Govind Nihalini and others. His performance in the films Bhumika, Aakrosh, Ardh Satya, Vijeta, Suraj Ka Satwa Ghora, Sardari Begum brought him national and international awards. But he became an indispensable figure in the commercial film industry with his manly body and outstanding voice.

His role JK in Ramesh Sippy’s successful film Shakti, balanced the soft tune of acting of Dilip Kumar as police officer and loud acting of Amitabh Bacchan as a smuggler. He killed Rakhee at the end of the film and was murdered by Big B when he was about to leave India. His act of kidnapping of Big B at a young age led to creation of a barrier between Dilip Kumar and Big B, where Big B thought Dilip Kumar never liked his son, which was untrue. It took Big B the entire film to know that Dilip Kumar loved him just his any other father.

Amrish Puri was sublime in Raj Kumar Santoshi’s film Ghayal. His character Balwant Rai was memorized by even children of India. He killed Raj Babbar and created false case against Sunny Deol. Sunny along with Sudesh Berry and others escaped from the jail and took revenge against Amrish Puri’s men inspite of Om Puri giving protection in the role of Police Officer Desouza. The entire action revolved around Amrish Puri.

Amrish Puri’s character Mogambo in Shekhar Kapoor’s Mr. India gave a new dimension to the character of villains. He dominated the film inspite of Anil Kapoor’s brilliance in using a scientific gazette to remain invisible. Amrish Puri never stuck to one style of acting and never got type-casted like other villains including Jeevan, Prem Chopra or Ajit.

He showed his comedy instincts in Hrishikesh Mukherjee’s Jhoot Bole Cowa Kate opposite Anil Kapoor and also David Dhawan’s Mujshe Shaadi Karogi opposite Salman Khan. Amrish Puri’s character role in films like China Gate, Chachi 420, still haunts viewers. He made viewers cry with his performance in the film Ghatak as father of Sunny Deol. He had cancer and died at the end of the film.

Amrish Puri acted in almost 400 films within a span of 25 years which include blockbusters like Big B’s Andha Kanoon, Aaj Ka Arjun, Dilip Kumar’s Duniya, Bidhata, Mashal, Sunny Deol’s Damini, Ghatak, Gadar Ek Prem Katha, Vishswatma, Sanjay Dutt’s Vijeta, Mahanta, to name a few. Critics argue that no other actor other than Om Puri and Naseeruddin Shah had shown the dynamism that Amrish Puri had shown over the years. His films should be restored and preserved for the new generation.
Posted by Souvik Chatterji at 10:10 AM