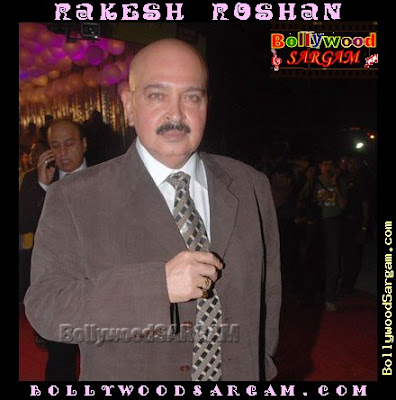 The viewers of bollywood films wish happy birthday to Rakesh Roshan on 6th September, 2009. He had one the most successful producer and director in the last 10 years. Being born in a prestigious family and the son of legendary composer Roshan, Rakesh Roshan had to prove a lot when he started his career as an actor in the early 70s.

His film Paraya Dhan with Hema Malini and Balraj Sahani became very successful. The film was remembered for the melodious music composed by RD Burman. The songs “ayo jhume gayere”, “holi re holi” became super hit in the early 70s. After that, Rakesh Roshan acted in many films opposite Rishi Kapoor.

From the time Rakesh Roshan launched himself as producer and director, he stormed bollywood. His film Karan Arjun with Salman Khan and Shahrukh Khan became super hit. It was an action block-buster where the music composed by Rajesh Roshan, the romance, the comedy everything entertained the viewers.

In the last 10 years whenever Rakesh Roshan had produced and directed film with his son Hrithik Roshan the films had become the greatest blockbusters of the year. Kahona Pyar Hai stormed bollywood in 2000. The other hit films of Hrithik Roshan directed by Rakesh Roshan included Koi Mil Gaya and Krissh. Rakesh Roshan chose different actresses like Amisha Patel, Preeti Zinta, Priyanka Chopra in his different films and all of them contributed to make the films successful.

Presently the viewers are awaiting the release of Rakesh Roshan’s new film Kites in 2009. With Hrithik Roshan and Barbara Mori in the film, the critics predict that it is going to be another blockbuster. Rakesh Roshan should continue his great work in the years to come.
Posted by Souvik Chatterji at 12:40 PM