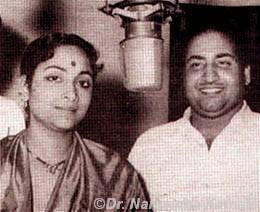 Geeta Dutt was probably the most successful playback singer of bollywood films after Lata Mangeshkar in the 50s and 60s. She had sung for all the leading singers of the period including Madhubala, Meena Kumari, Wahida Rehman and others.

Geeta Dutt was extremely successful in Bengali films as well. Her song “tumi je amar” sung in the film Harano Sur for Suchitra Sen became the greatest hit of the 50s. The song was played in Uttam Kumar’s film Harano Sur a number of times by the director Ajoy Kar and was used to bring back the memory of Uttam Kumar who lost it in an accident.

The other films where Geeta Dutt made significant contribution included Lukochuri, Modhyorater Tara, etc. Geeta Dutt’s songs should be preserved and restored.
Posted by Souvik Chatterji at 4:16 PM