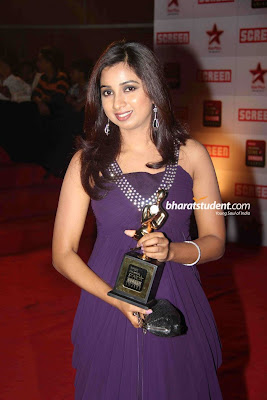 Happy birthday to Shreya Ghoshal.
The viewers of bollywood films wish happy birthday to sweet singer Shreya Ghoshal on 12th March, 2011. From national awards, Zee Cine Awards, Starscreen awards and filmfare awards, she had remained a frequent recipient of the awards due to her sheer brilliance.

Bollywood films in the 50s, 60s and 70s were dominated by Lata, Geeta Dutt, Shamshad Begum, Suraiya, Asha, Suman Kalyanpur, etc. In the 80s and 90s Alka Yagnik and Kavita Krishnamurty made a very notable contribution in bollywood films. Shreya Ghoshal had established herself the future singer of bollywood cinema for the last few years.Born in a Bengali family in Rawatbhata, in Kota district of Rajasthan, Shreya Ghoshal learnt classical music from Mahesh Chandra Sharma. She participated in the musical competition in the TV Channel titled Saregamapa, and when she reached the finals after defeating renowned female singers, the producers, directors and composers were moved by her performance.

She made her presence felt with her song in the film Devdas, directed by Sanjay Leela Banshali, with the song “bairi piya” and after that she never had to look back. Just like Sonu Nigam had created a gharana by himself and composers agree about his versatility, similarly Shreya Ghoshal is undoubtedly the future of Indian playback singing.She received the filmfare award for the best female singer along with Kavita Krishnamurty for the song “dola re” from the film Devdas, picturised on Madhuri Dixit and Aiswariya Rai. Her other hits songs include “jadu hai nasha hai” from the film Jism. She also amazed the listeners with the song “piyu bole, piya bole” picturised on Vidya Balan, from the film Parineeta, where Sonu Nigam sang it for Saif Ali Khan. The sweetness of her voice matched the period (late 19th century) when singers of the Bengali traditional families used to present their talent in soft style

She also the song “apne aansoo peene ke liye” from the film Paheli, very well, along with powerful performance from Rani Mukherjee and Shahrukh Khan in the film. She also received filmfare award for the best singer for her song in the film Guru, titled “barsdo re” composed by AR Rehman.
She had song notable Bengali songs like “pagla hawa” in The Bong Connection, “mon diye mon niye” in Agnipath, etc. In 2010, her song “bahara bahara” in the film I Hate Luv Stories was striking. She was extremely sweet in the duet song “tu ne to palbhar me chori kiya re jiya” with Sonu Nigam, in the film Dabanng, which went to do a business worth 150 crores. With a number of songs which are going to be released in different films in 2011, she is expected to continue her good work and the viewers and listeners expect her best in the years to come.
Posted by Souvik Chatterji at 8:11 AM