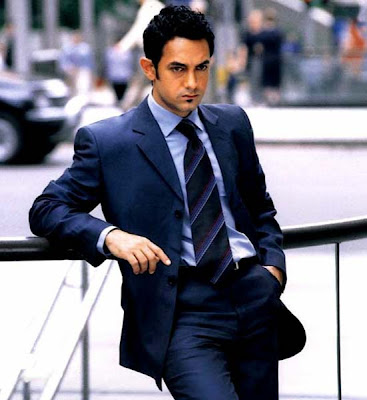 The viewers of bollywood films wish happy birthday to Mr. Perfectionist and Committed Star Amir Khan on 14th of March, 2011. He has proved himself as one of the most committed actors of modern bollywood films. He also carried on the legacy of Tragedy King Dilip Kumar of acting in less number of films and meaningful films. He started his career with the hit film Qayamat Se Qayamat Tak in 1988 opposite Juhi Chawla.

Amir Khan was sublime in his performance in patriotic film based on the life Mangal Pandey and he did an excellent job in the film Sarfarosh. Even as a director he showed innovative vision by making a film on the subject related to children. The film Taren Zameen Par showed that every child in the world is special. They have their innovative qualities. The job of the teachers and the academicians should be to unearth their skills The songs in the film composed by Shankar Ehsaan Loy were also sensational.

Even in 2008, Amir Khan’s film Ghajini was remarkable in nature. He played the role of a person who lost his memory every 20 minutes. He took revenge against the murder of his girlfriend, but he did it with his limitation in respect of the lost memory. He had played probably the role of his career. He came out with even greater hit film in 2009, The 3 idiots. The film had done more than 200 crores business till now. Even more than that the film directed by Raj Kumar Hirani, had a serious social message to give. The message is that the parents should not overburden the students with their own choices. Students should be allowed to specialize in the line they love and enjoy. Although filmfare awards had not been fare to Amir Khan, it does not matter for Amir Khan at all. He is the actor of the refined section of audience and will remain there for periods to come. In 2010, his venture Peepli Live had been ably appreciated by the critics and the audience as a whole.

In 2011, his film Dhobi Ghaat did well in most part of India. He had acted well in the film. He also requested hall owners not to give break in the film, because it takes away the concentration in the film. He is a very cultured actor and the viewers have lot of hope on the thoughtful personality for innovative ventures in the years to come.
Posted by Souvik Chatterji at 9:17 PM