Bhupen Hazarika and his achievements. 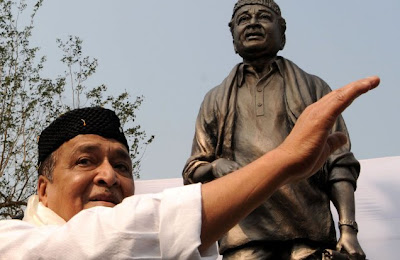 Bhupen Hazarika and his achievements.

The listeners of music in India and Bengal admire the great creations of maestro Dr. Bhupen Hazarika. The great singer, lyricist, poet and composer was born on 8th September, 2010. He was born in Sadiya, in Assam in 1926.

He returned back and made a major contribution to Assamese film industry with his songs. He made the Bengali listeners flabbergasted with his brilliant songs. The songs were not only romantic, but more than that had provided social message.

One article is too small to bring forward the achievements of the great singer, composer and creator Dr. Bhupen Hazarika. It can be said that he was one of the greatest genius that Assam had produced during the golden age. There are statues of the legend made in Guwahati, the capital of Assam.

The musiclovers expect him to continue the great work that he start 60 years ago and pray for his long life. His works should be restored.
Posted by Souvik-indrajalik at 7:40 AM

Bhupen da was not only a singer,a great lyricist-who wrote songs on each and every emotion, feeling and situation of human life, a great music composer, a great film director , a great laureate and a great humanitarian.. he sang for the people. His was the voice of the masses..his voice had the depth of the ocean..a doctorate from columbia university ,a wandering vagabond artist , his songs are truly a subject for research. We pay tribute to him..he shall remain in our hearts forever and ever...h cannot die