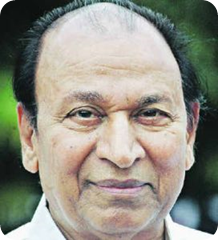 The viewers of Kannada films will remember actor Raj Kumar on 12th April, 2011 on his death anniversary. His actual name was Singanalluru Puttuswamaya Mutthuraju.

He had acted in more than 200 Kannada films. His first hit film was Bedara Kannapa in 1954. His next successful film was Kalahasti Mahathyam which was released later. It was made in Telegu language.

Bhagyada Bagilu was his 100th film which was very successful. Devatha Manushya was his 200th film. Famous actress Rekha made her debut opposite Raj Kumar in the film Goadalli CID 999. He had acted opposite many famous actresses in his illustrious career including Madhavi, Jayaprada, Leelavathi, Jayanti, Bharati, etc.

He produced films like Kaviratna Kalidasa where he acted too. He also performed in the film Shankar Guru. He won national award for the song “naadamaya”. He also sang song in the film Mahishashur Mardini.

In 2000, Veerapan and his gang abducted the famous actor and his relatives from his house. Veerappan was wanting the release of the members of his gang who were arrested under anti-terrorist laws. He was returned after 100 days of captivity.

It is not possible to highlight the work of legendary actor Raj Kumar in a small article. He had been a great asset to South Indian film industry and will remain immortal in his films and songs. His films should be restored.
Posted by Souvik Chatterji at 3:24 PM

You have mentioned wrong information. Dr. Rajkumar death anniversary is on 12th April. Not 12th March. Please make this correction in your record.

Dear Venkateshji,
Thanks for attracting the attention on that count.
It is true that 12th April is the death anniversary of Superstar Raj Kumar.
I apologize for the printing error.
Best Wishes,
Souvik Chatterji.