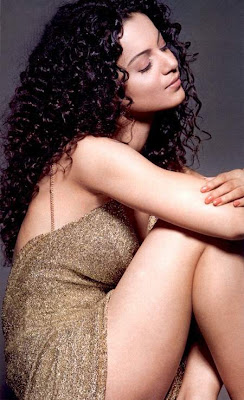 The viewers of bollywood films wish happy birthday to successful bollywood actress Kangana Ranaut on 20th March, 2011. Kangana Ranaut had created a strong box-office for herself during her short career till now.

In 2008 when she acted in the film Fashion, she amazed the audience with her powerful performance in a Madhur Bhandarkar film, which had more elements involving reality than larger than life image. The film showed the new entrants in the fashion industry. Priyanka Chopra played the main role in the film who had come from her native town to Mumbai to create her identity in the fashion industry.

Priyanka interacted with Kangana Ranaut in the fashion industry and came to know about her struggle as well. Success in that industry is obtained at the cost of peace, security, happiness. Both Kangana and Priyanka played their part to perfection and created a mark in the minds of intellectual audience. Both Kangana Ranaut and Priyanka Chopra received filmfare awards for their best performance in Fashion as best supporting actress and best actress respectively.

Kangana Ranaut played her role to perfection even in the film Gangster and Life in a Metro. Her performance in Gangster brought her the best debutant award in 2007. In Life in a Metro, she played the role of a girl who could not decide about what to do in a Metro city. She was confused about the boyfriends and could not find out who really wanted her.

She was probably at her best in the film Raaz, the mystery continues opposite Adhyayan Suman and Imraan Hashmi. It has been released in January, 2009 and already done good business in India and abroad. The unsatisfied soul of Jackie Shroff had entered her body, and Imraan Hashmi could see the future events while he did paint Kangana’s face.

At the end of the film, Kangana and Imraan Hashmi went to the place Kalindi, where they unearthed the past events where a chemical plant used to dump its toxic wastes in a sacred lake near a temple. When Jackie Shroff complained about it, he was killed by the gundas sent by the priest. So the unsatisfied soul of Jackie Shroff entered the body of Kangana Ranaut to tell the story to everyone. Kangana again can get nomination for best actress for her horrified performance in the film Raaz –the mysery continues.

Although her film Kites opposite Hrithik Roshan and Barbara Mori and No Problem opposite Akshay Khanna did mediocre business in 2010, the viewers expect her to do well in 2011. She did well in those films but the films were not accepted by the audience for different reasons. She has age, beauty and acting talent in her favour which can make an impact in 2011.
Posted by Souvik Chatterji at 8:26 PM