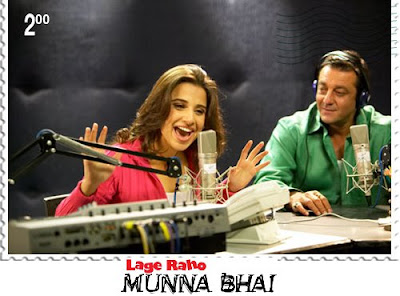 Vidya Balan stormed into bollywood films with successful film Parineeta. She played the character of Parineeta, the epic character of legendary writer Sarat Chandra Chatterji. Her performance opposite Saif Ai Khan and Sanjay Dutt charmed most of the viewers of bollywood.

She continued her dream run after giving a brilliant performance in the film Lage Raho Munnabhai. The film was related to Gandhigiri. Sanjay Dutt on one hand showed his level of maturity in comedy roles especially as Munnabhai. On the other hand Vidya Balan displayed her effortlessness in acting in the film. She played the role of a keeper of old age home, who faced the problem of being ousted from the place by Boman Irani. Sanjay Dutt used his Gandhigiri to convince Boman Irani was adamant. Vidya Balan’s dialogue good morning Mumbai as radio jockey and lips in the song “pal pal pal pal” amused the viewers.

After the success of Lage Raho Munnabahi, Vidya Balan got offers to act in many films like Bhoolbhulaiya, Hey Babby, etc. In Bhool Bhulaiya she even succeeded to play the role of ghost in the film Bhoolbhulaiya opposite Akshay Kumar. But to her ill luck none of these films did great business and her demand in bollywood films started decreasing.

A big section of viewers believe that ultramodern make up does not suit Vidya Balan and wherever she tried to play those roles they were not accepted by the audience at all. The best example was Hey Babby. She played the role of a girl who had settled in Australia. She came to India to attend a wedding where she got attached with Akshay Kumar. The subject relating to the little child of Vidya Balan had promise, but Vidya Balan’s make up did not help her.

The other films like Kismat Connection opposite Shahid Kapoor also did not do well in the box-office. Some way or the other she is not there in the number one spot in bollywood which is shared by Kareena Kapoor, Katrina Kaif and Priyanka Chopra.
She requires a super hit film very soon to stay in the competition. There is lot of expectation from the film Paa. Already the viewers are anxious to see Big B with a strange make up in a role of a 13 year old child. Paa can change the destiny of Vidya Balan. Let us hope it does well.
Posted by Souvik Chatterji at 5:17 PM