Kalyanji Anandji cared for Rafi in the 70s. 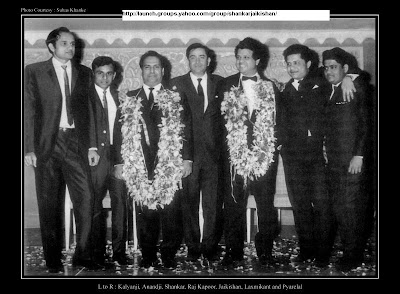 Kalyanji Anandji cared for Rafi in the 70s.

Mohammad Rafi was the uncrowned king of bollywood music in the 50s and 60s. After the composers like Naushad, Shankar Jaikishan, Roshan, Madanmohan, Ghulam Mohammad, OP Nayyar, and others realized the range of voice of Rafi, they made him the first choice during a period when able singers like Mukesh, Manna Dey, Talat Mehmood, and others were at the top of their career. But Kalyanji Anandji’s association with Rafi in the 70s require special mention considering the fact that RD Burman and SD Burman sidelined Rafi to promote Kishore Kumar and with the death of Jaikishan, Roshan and many composers the only challenge that could be put forward before RD Burman was done by LP and KA.

But wherever he got scope of composing music in the films of such big shots, he used Rafi very well. Rafi’s songs in Shammi Kapoor’s film Bluff Master (with hit song of Rafi like “govinda ala re”) and Joy Mukherjee’s film Ji Chahta Hai (the title song “ji chahta hai” require special mention) were very melodious. KA’s music in Shashi Kapoor’s film Jab Jab Phool Khilen created sensation in the mid 60s.

Each and every song of Rafi in Rajender Kumar’s Geet became super hit including “aja tujhko pukare meri geet”. The compositions of KA involving folk flavor of the mountains always enchanted the Indian audience. Right from Himalay Ki Godme to Maryada, KA maintained the consistency.

KA Rafi combination created gold in Raj Kumar’s Maryada as well. Although KA gave songs to KK like “gussa itna hasin hai to” for Rajesh Khanna, they maintained the Raj Kumar Rafi combination by giving the song “dhol sajni dhol jani”. KA kept the Dilip Kumar and Rafi combination intact in the film Bairaag with hit songs like “peete peete”, “sari shahar me aapsa koi nahi”, etc. KA continued with Rafi in Feroz Khan’s films as well. One of the hit songs include “kya dekhte ho” from the film Qurbani.

Due to huge demand for KK to sing for Big B, KA had to comprise with KK in films like Muqaddar Ka Sikandar, but KA used Rafi to sing the same title song “rote hue ate hai sab” which was sung by KK. KA showed their respect for Rafi without doing injustice to Mukesh, Manna Dey, Kishore, Mahendra Kapoor and others. It is not possible to cover the Rafi KA combination in a small article as KA had contributed in more than 250 films over a period of 40 years. The songs and the films should be restored.
Posted by Souvik Chatterji at 11:11 AM