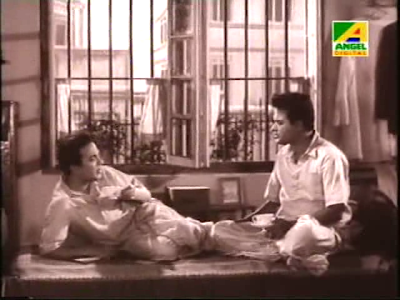 Music lovers all across India remember Shyamal Mitra on his death anniversary on 15th November, 2009. Shyamal Mitra was the one of the leading singers of Bengal during the golden age and for 40 years dominated the world of modern songs and film music along with Manobendra Mukherjee, Manna Dey and Hemant Kumar. His nasal tune, emotional base, high pitch and effortless stretch of voice had remained immortal over the last 50 years. His first song “sriti tumi bedona” was composed by his guru Sudhirlal Chakravarty in the early 50s.

At that time Robin Chatterji, the leading composer of Bengali film music used Shyamal Mitra to sing film songs for Uttam Kumar, the greatest superstar of Bengal, and his songs “amar sapne dekha rajkonya” in the film Sagarika, 1956, “o mon kokhon shuru kokhon je shesh” in the film Kamal Lata, 1969, touched the souls of numerous listeners. Robin Chatterji experimented in the film Deeper Naam Tiya Rong with Portuguese folk music and the songs sung by Shaymal Mitra titled “o amar saat rajari dhaan” and “phiriti basakar kuye giya dishe” made the listeners speechless. The intonation of songs was in rural accent where Shyamal Mitra made an everlasting impact in the minds of the listeners.

The notable films where his music was impressive include Bon Palashir Padabali, Raj Konya, Bhranti Bilas, Amanush, Ananda Ashram, etc. Some of the notable songs in Bon Palashir Padabali included “aha mori mori”, “dekhuk para porshite”, “udash bayul”, etc. His song “dil aisa kisi ne mera tora” sung by Kishore Kumar in the hindi film Amanush gave him filmfare award for the best singer. His composition for Kishore Kumar and Asha Bhosle in the film Anand Ashram titled “sara pyar tumhara” became super hit with the excellent lips of Uttam Kumar and Sharmila Tagore.
My father, Ex-Chief Public Prosecutor Chitta Ranjan Chatterji, interviewed Shyamal Mitra in Scottish Church College in 1956, where he participated in a cultural night along with Manobendra Mukherjee and Satinath Mukherjee. Shyamal Mitra reiterated the contribution of Deep Narayan Bitholia in All India Radio who had composed songs under the head of Romyogeeti. His romantic stretch of voice in the song “boujhiuri go” had created a lasting impression in the minds of the listeners. Mr. Chitta Ranjan Chatterji was astonished with the humbleness of Shyamal Mitra who was down to earth and respectful towards his predecessors like Sudhirlal Chakaravarty and Satinath Mukherjee.

Shyamal Mitra’s brother Salil Mitra in TV interview emphasized Shaymal Mitra’s sense of respect towards legendary composer Robin Chatterji. While the shooting of the film Kamallata were taking place in bagan bari in rural West Bengal, Shyamal Mitra was playing badminton with Uttam Kumar. When Robin Chatterji heard his recording of the song “o mon kokhon shuru” he was unsatisfied and questioned Shaymal Mitra’s result of diksha in Naihati as the song lacked emotions in Bengali called “abeg”. Shyamal Mitra returned back and brought out the devotional andaz of his lifetime and Robin Chatterji gifted a perfume as a token of appreciation for the committed singer of Bengal.

His voice suited Uttam Kumar a lot and his songs in the film Sokher Chor, Bhranti Bilas, Rajodrohi, Andha Atit had been landmarks in Bengali film history. He died in the mid-80s after becoming a legend along with Hemanta Kumar, Manobendra Mukherjee and Manna Dey and it is not possible to highlight his achievements in a small article. His songs and films should be restored.
Posted by Souvik Chatterji at 10:36 AM