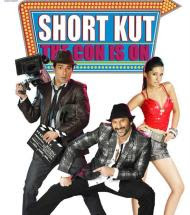 Anil Kapoor had come up with another production venture titled Shortcut. The full name of the film is Shortcut –the con is on. Akshay Khanna had been a struggling assistant director in the film. He met a struggling actor Arshad Warsi and both dreamt about getting good start to their career. Although Akshay Khanna had merit and deserved a good project, Arshad Warsi was nothing better than a joker. He himself thought that he had a lot of potentials and deserved good role.

The film had been shot in the romantic locations of Thailand. Along with the comedy elements in the films there were romantic sequences as well. Anil Kapoor was ably supported by director Neeraj Bhora. Neeraj Bhora previously had experience in making comedy films like Hera Pheri, where his work was appreciated.

Shankar Ehsaan Loy composed music in the film. They had done a great job once again. Most of the songs were innovative, especially “kal nau baje” had a great romantic appeal. The song already had become hit even before the release of the film. The performance of Akshay Khanna and Arshad Warsi were brilliant. Akshay Khanna is probably the only actor in bollywood who had lost his hair, yet had maintained his steady stardom. Amrita Rao did well in the film.

Anil Kapoor as producer, can expect a good response. The viewers will also enjoy the guest appearance of Sanjay Dutt in a song sequence in the film. The film has all the elements of success and is going to be hit.
Posted by Souvik Chatterji at 3:47 PM

Very sorry to say that the film really disappointed me. It is a remake of a brilliant malayalam film but the hindi version is not upto the marks ;(