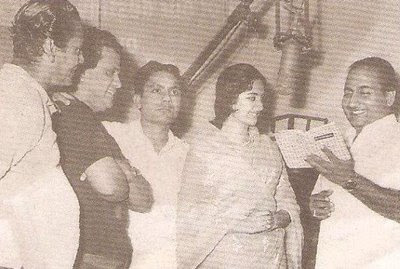 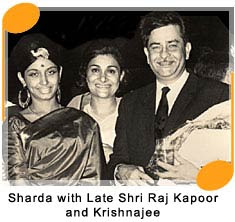 Rafi had sung many duets with all the leading female singers in the country during the 40s, 50s, 60s and 70s. He had sung around 440 duets with Lata Mangeshkar, who dominated bollywood music during the 50s, 60s and 70s. He sang duet songs with Shamshad Begum, Mubarak Begum, Geeta Dutt, Asha Bhosle, Suman Kalyanpur and others. During that period he sang many duets with Sharda as well, mainly in films composed by Shankar Jaikishan. Sharda won a number of filmfare awards for best singer for her performance in mainly the films of Shankar Jaikishan. Sharda is still alive and also has received the Rafi Memorial Award in 2007, from the Rafi Lovers Circle, Calcutta.

Most of those songs sung by Rafi and Sharda during the 60s and 70s did good business along with the success of the films. In Seema the song “jab yeh dil udaas hota hai” became super hit. The duet song of Rafi and Sharda was appreciated by the viewers. In the film Gumnaam, the song “jaane chaman shola badan, pehelu me ajao”, became superhit. Rafi’s seductive andaz for Manoj Kumar thrilled the audience along with Sharda’s voice for Nanda. Sharda had a different type of voice in comparison to other singers, so her combination with Rafi was very unique.

Shankar Jaikishan gave the song “sun sun sun re balam, dil tujhko pukare” in the film Pyar Muhobbat. The main song was sung was by Sharda, while Rafi finished it with the last line. The song was picturised on Dev Anand and Saira Banu, with one singing the song for the other over telephone. It created a very romantic andaz which was enjoyed by the viewers. There was a song in the film Shatranj, titled “bakamma bakamma” sung by Rafi and Sharda, having comedy andaz. Although the film did average business, the song did well.

Some of the other duets of Rafi and Sharda included “aap ki ray mere bare me”, “aya kaisa zamana o baba”, “pyar ka kar uran khatola”, etc. Besides Sharda sang many hit duets with Mukesh as well including “chale jana zarah thehero” in the film Around The World, picturised on Raj Kapoor and Rajashree, “duniya ki sair kar lo”, etc., as Mukesh sang many songs composed by Shankar Jaikishan. Probably Rafi’s capability to adjust himself with any female singer including Lata, Geeta Dutt, Sharda, Asha Bhosle, Shamshad Begum, etc., showed the level of adaptability and effortlessness of the giant singer. Shankar Jaikishan always banked their resources on Rafi and for those reasons even the duets composed for Rafi and Sharda were melodious and evergreen. The songs should be preserved.
Posted by Souvik Chatterji at 11:56 AM