Rafi had sung legendary songs for all the leading stars of bollywood films in the 50s, 60s and 70s. Rajender Kumar had given lips in many sophisticated songs of Rafi. Major compositions wee that of Shankar Jaikishan who had contributed for the high class of music during the golden age of bollywood music.

In the film Suraj, SJ composed the songs for Rafi including “bharaon phool barsao”, “kaise samjhayoon”, “itna hai tujhse pyar hai mujhe”, etc, which were all successful and contributed for the success of the film. Lata and Asha also sung their songs very well in the film. Rajender Kumar was elegant in giving lips in the film. 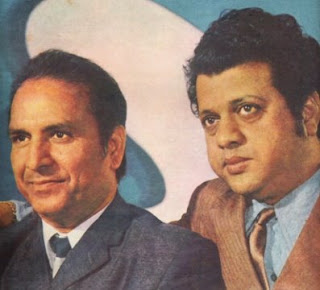 In the film Ai Milan ki Bela, SJ’s composition for Rafi included hit songs like “aha ai Milan ki bela”, “to bura maan gaye”, “tum khamseen ho”, etc. All the songs were hit and the pair of Rajender Kumar and Saira Banu was well accepted by filmlovers. The songs in the film Jhuk Gaya Aasman, including “o priya, kaun hai jo sapno me aya”, “kahan chal diye”, etc., were equally successful and the romantic pair of Rajender Kumar and Saira Banu stormed bollywood during that age. 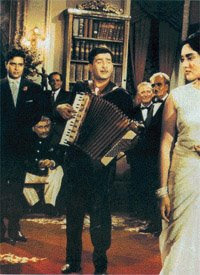 SJ, Rafi and Rajender Kumar had a huge partnership in giving hit songs for over ten years and even songs like “meherbaan likhoon”, in the film Sangam, show the class of composition even after 40 years of creation. The songs and the films should be preserved for their aesthetic value.

Posted by Souvik Chatterji at 8:40 PM