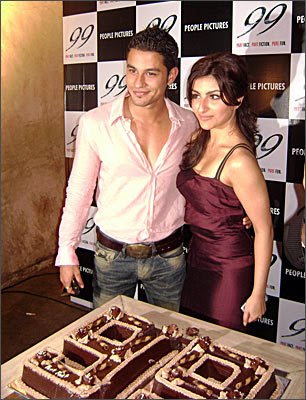 As the history of comedy films in the last 5 years had been favourable, director Raj Nidamoru and Krishna D.K. again experimented with comedy in the film 99. The film was based on the background of Indian cricket being entangled with the scams relating to match-fixing in the late 90s. That was the time when South African team was also alleged to have been involved in match-fixing which led to banning of many cricketers from their country.

In this film, Kunal Khemu and Cyrus Broacha were two crooks who old duplicate sim cards during the period when mobile phones just entered the Indian market. For middle-class people the schemes provided by the mobile companies were attractive and it made mobile phones very popular. When one of such sales led to controversy with Mahesh Manjarekar, they were compelled to either join their gang or pay them Rs 40 lakhs.

The gang previously worked as extortion agents and Kunal Khemu and Cyrus Broacha were persuaded to get involved in the same business. They were sent to collect the dues from Boman Irani, a bollywood actor and also a serial better. Boman Irani promised the two of them that he could get them away from the tangle by winning a bet relating to India South Africa match.

In between there were romantic sequences between Kunal Khemu and Soha Ali Khan, but the scope of such romance was too small if the other happenings in the film are taken into consideration. The entire part where Boman Irani delegated the responsibility relating to providing betting cards of the India South Africa match to Dilli’s bookie Vinod Khanna had both serious and comedy sequences.

From that time onwards one character passed their blame on to the other character. In totality the subject-matter of the film was very novel. But the execution was not that impressive. In 2009, most of the films had done very ordinary business. Considering that factor the film 99 is not looking as one of the films which can change the fortunes overnight.

But the film has the prospects of doing moderate business. Boman Irani, Kunal Khemu and Soha Ali Khan’s performance in the film was very impressive. Let us hope for the best.
Posted by Souvik Chatterji at 7:45 AM