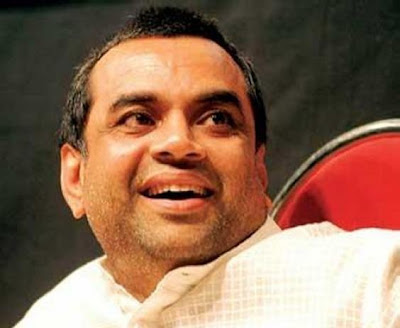 The viewers of bollywood films wish happy birthday to Paresh Rawal on 30th May, 2009. He had remained indispensable for the last ten years. He initially showed his metal in off-beat films like Woh Chokri.

The image of villain in Woh Chokri inspired directors to cast him as villain in other films as well. His landmark films as villain include Vijeta and Mahanta opposite Sanjay Dutt, Auzaar opposite Salman Khan, Gupt opposite Bobby Deol, Ghayal opposite Sunny Deol, to name a few.

From the late 90s, action films lost their predominance and bollywood banked their resources on comedy films. From that period Paresh Rawal remained the uncrowned monarch of bollywood films. His performance in 36 China Town was brilliant by every acting standard. He was being suspected as one of the culprits in a murder case by Akshay Khanna and struggled hard to prove himself wrong.

Paresh Rawal did an even better job in the film Chachi 420 with Kamal Hassan. He wanted to marry chachi played by Kamal Hassan himself, and balanced the powerful performance of Om Puri and Amrish Puri.

Paresh Rawal’s performances in softer roles also had touched the viewers. He was sublime in the film Nayak opposite Anil Kapoor and Amrish Puri. Even then, the viewers expect to be represented in comedy roles more than any other roles.

His performances in films like Maalamaal Weekly with Om Puri and Mere Baap Pehle Aap with Akshay Khanna, proves the fact that he cannot be replaced in witty roles. The viewers expect him to continue the great work he had done over the last 20 years.
Posted by Souvik Chatterji at 10:58 AM

Happy birth day to the versatile actor Paresh Rawal,on 30th May,2010.
Wishing him more and more success in future.