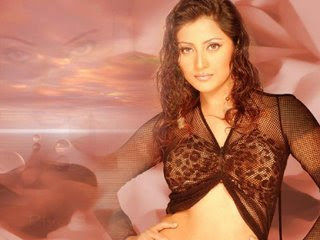 Comedy films in the last few years have allowed the unsuccessful actresses to get recognition through the group effort. Golmaal was one of the hit films where Reema Sen got a scope of performing opposite Ajay Devgan, Tushar Kapoor, Arshad Warsi and others.

Tushar Kapoor played the role of a dumb character who could not express himself. All the four friends took shelter in Paresh Rawal’s house as he was blind and thought them to be their grandson. Reema Sen was their neighbor and was liked by the all the four friends. She initially showed irritation about the actors but later one got impressed with their skills.

Each of the friends including Ajay Devgan, Arshad Warsi, hatched up plans to impress Riya Sen in one way or the other sometimes by winning racing car competition or dancing competition, etc. At the end of the film Reema Sen married Tushar Kapoor to everyone’s surprise. The songs “golmaal” became successful.

Reema Sen got a witty role in the film Phir Hera Pheri. She had an affair with Akshay Kumar and got involved in the hera pheri to return the money to be given to the underworld gang. Sunil Shetty got involved with Bipasha Basu, who played the role of a fraud character who promised to get the money of private persons being doubled, and ran away with the money to pay the debts of few wrongdoers.

Reema Sen and Bipasha Basu played a key role when all the characters in the film assembled in a circus to get the diamonds hidden in the place. All the actors including Milind Gunaji, Paresh Rawal, Johnny Lever, etc., did a great job in the circus scene. The acrobatic acts in the circus done by Akshay Kumar and Sunil Shetty entertained the viewers and the film ended up being successful.

Both the films Golmaal and Phir Hera Pheri had impressed the viewers to such an extent that the sequels of the films are under production at the moment. Reema Sen probably got the greatest success in those films (which were related to group effort), but her actual test lies in the films where she can act independently.

The viewers expect Reema Sen to show her unique style in new films to create her separate identity and contribute well in bollywood films.
Posted by Souvik Chatterji at 12:29 PM