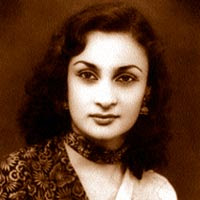 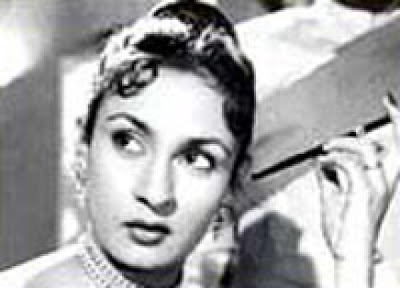 Nadira used to be considered a sizzling star of the 50s and 60s, the golden age of bollywood cinema. Her beauty was different than the traditional stars like Nargis or Madhubala, and her charishmatic intonation had created a separate place in the minds of viewers. She acted in the first coloured film of bollywood that is Aan, made in the early 50s opposite Dilip Kumar.

From Aan itself, the smartness of Nadira reflected in her acting as the film required horse-riding and adventurous acts which were difficult for other actresses of the same era. In 1955, Raj Kapoor gave the role of her lifetime in the film Shree 420. Her villainish performance in the film did outcast Nargis in the same film. The song “mur murke na dekh” composed by Shankar Jaikishan and sung by Asha Bhosle and Manna Dey was picturised on Nadira and Raj Kapoor. The lips of Nadira created a lasting impact in the minds of the viewers and Shree 420 became a super hit film.

The good part of Shree 420 in the career of Nadira was that it made her a rising star. But the bad part was that from that film her image in negative characters got bolstered and producers and directors started casting her in negative roles. In Dil Apna Aur Preeti Parayi, she acted opposite Raj Kumar and Meena Kumari. Raj Kumar had affair with Meena Kumari, a nurse in the film, and after marriage with Nadira, the weakness towards Meena Kumari led to disharmony in the family. Nadira matched Meena Kumari in acting in a musical blockbuster, where once again Shankar Jaikishan amazed the viewers with songs like “ajeeb dastan hai yeh”.

Nadira’s strong command over urdu had earned her majestic roles in films like Pakiza, where the muslim pardanashin community was shown. Nadira’s performance in the film was appreciated by the critics who consider the epic film of Kamal Hamrohi, as one of the greatest films of all times. In the mid-70s, with advent of action films, characterization of negative personalities underwent a change. Even in those films Nadira contributed in her own way. Her performance as a step-mother of Shabana Azmi in the film Amar Akbar Anthony created special attraction. Her torture towards Shabana’s family was detected by Vinod Khanna, who was police officer in the film and she was arrested.

In the mid-80s, she made valuable contribution in Ramesh Sippy’s romantic film Saagar. She was associated with Kamal Hassan, who made the viewers cry at the end of the film when his romance ended in failure. She loved Dimple Kapadia who was addicted towards Rishi Kapoor. When Rishi Kapoor was attacked by his relatives Kamal Hassan saved at the cost of his own life. Kamal Hassan had special relation with Nadira and he used to disclose his private matters to her. Nadira was compassionate towards Kamal Hassan when she came to know about his sacrifice.

In the 90s, Nadira’s performance in the TV serials directed by Gulzar, where Om Puri interviewed her about her film career, was equally impressive. Kamini Kaushal also acted in the serial and matched Nadira in the special role. Nadira’s films should be preserved to grace her remote style of performance having sizzling effect and also lasting appeal.
Posted by Souvik Chatterji at 11:56 AM