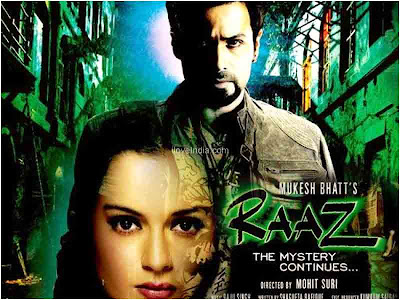 Review of Raaz – the mystery continues.

Imraan Hashmi, a painter in the film could visualize the future and see what was going to happen to Kangana Ranaut. From his dreams he realized that the source of events were present in the place Kalindi in Himachal Pradesh. He helped Kangana Ranaut and took her to Kalindi.

In Kalindi, a chemical factory used to dump the toxic wastes in the sacred waters of a nearby temple. Jackie Shroff came to know about the fact and informed the respective authorities about it. But the priests and personnel of the factory conspired together to conceal the matter. Jackie Shroff informed about the incident to Adhayanan Suman, who was a media person. He heard it and promised Jackie Shroff that he would publish it soon. Instead of publishing it he disclosed the secret before the temple authorities and factory’s administrators and took huge amount of money as he was instigated by Kangana Ranaut about earning money in any manner whatsoever.

The conspirators killed Jackie Shroff by beating him brutally. His spirit got inside the body of Kangana Ranaut to inform the people about the incident. Jackie Shroff ruined her life to show that she was the root cause of all the incidents. Adhayanan Suman was shown that the path he had used to earn money was totally wrong.
A preaching of social reformer was displaced in the body of Kangana Ranaut which showed that her body was filled with dirt. Although the film started off with the ghostly events but ended with a social concern. The film had done moderate business in the 2 months after its release and will end being hit film.

Producers and directors can make similar type of films in future.
Posted by Souvik Chatterji at 9:54 AM