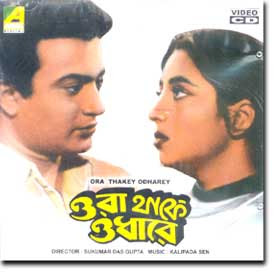 Dhiraj Bhattacharya was considered as one of the meritorious performers of Bengali silver screen in the 50s. With an impressive screen presence he was initially cast in the film Behula Lakhindar which was based on folk tales. The romantic performance attracted the attention of viewers during an age when films were at their process of advancement. He followed it up with romantic performance in the film Shohor Theke Dure where Johor Ganguly and Molina Debi also had significant roles.

In the early 50s, Dhiraj Bhattacharya amazed the viewers with a remote style of dialogue throwing in the film Hanabari. It was a detective film directed by eminent writer Premendra Mitra. There was a spooky house where tenants could not stay for a long period. The treasure that was hidden beneath the house was the attraction for which the culprit in the film created illusion in the minds of the tenants and driven them away. Dhiraj Bhattacharya played the role of the detective who disguised himself as a beggar and stayed in the vicinity of the spooky house. At the end of the film he solved the mystery to Pronoti Bhattacharya, Mita Chatterji and their relatives who came to stay in that house.

During that time Bengali films were already blessed with romantic heroes like Uttam Kumar, Bosonto Choudhury, Asit Boron, Bikash Roy and others. Dhiraj Bhattacharya used his acting skills in negative roles and created attention amongst the viewers. His performance in the film Konkal requires special mention. He killed his wife Malaya Sarkar in the film and buried her in his house. Her skeleton came back to the house to revenge against Dhiraj Bhattacharya. The film used to considered one of the most innovative horror films of early 50s.

His other successful film include Dakinir Chor. There was also he showed his skills in converting a stick into a revolver to defend himself before the investigating agency during the investigation of the crime which was alleged to have been committed by him. His performance in the film Moroner Pore requires special mention. Uttam Kumar was mental doctor who treated Pronoti Bhattacharya who had a reincarnation. She told the people about the killing of her husband in her previous birth by Dhiraj Bhattacharya. The romantic pair of Uttam Kumar and Suchitra Sen was as impressive as Dhiraj Bhattacharya who had created revolution in villainish performances. Bharati Debi played the role of the person who was reborn in the form of Pronoti Bhattacharya.

Incidentally Dhiraj Bhattacharya was the zamindar of the estate of Panjia, near Jessore, in Bangladesh. Instead of performing in roles involving landlords he used his innovative skills in depicting negative characters. His other impressive roles include the role of the Diwan in the film Neela Chole Mahaprahu based on the life of Lord Chaitanya.

Similarly he spoke the language of Jessore (Bangal) in Uttam Kumar’s film Ora Thake Odhare to perfection. He also did well in Uttam Kumar and Suchitra Sen’s film Sanjher Pradeep. It is a tragedy that Dhiraj Bhattacharya died at a very early age in the late 50s, when he was considered as one of the most versatile performers like Bikash Roy or Kali Banerjee. The dynamic actor of stage and Bengali films Manoj Mitra was greatly influenced by the dialogue throwing of Dhiraj Bhattacharya.

His performance in character roles marks the beginning of innovative performances in Bengali films and for those reasons his films should be preserved and restored.
Posted by Souvik Chatterji at 12:43 PM