The success of Luck by Chance lies in its simplicity. 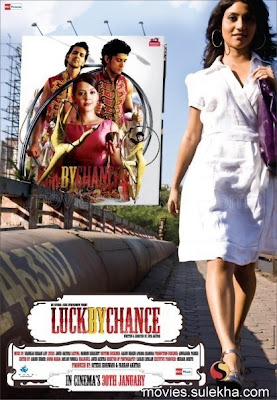 Even more than that the film showed that newcomers had to wait for opportunities and then if their luck shined they got the scope of showing their talent in the film. Konkona Sen Sharma, who struggled in her young age for getting a lead role in the contemporary film, got selected after a screen test. But later the producer and director told her that she was not required. When she said that she had acting talent she was told that it was glamour that mattered more than acting capability which was there in the winners of beauty contests and fashion world.

Farhan Akhtar was a friend of her. First Konkona dropped her photo before Rishi Kapoor for reconsideration and later told Farhan about trying his luck in the industry. Hrithik Roshan, the actor in the film asked Rishi Kapoor to skip him and give the role to a newcomer. He wanted a break. Rishi Kapoor accepted his proposition.

While the shooting for the film was on, Dimple Kapadia’s daughter entered into an affair with Farhan Akhtar. Farhan forgot Konkona Sen Sharma and their story was published in the print media. He even forgot the contribution of Konkona in his life and blamed her for the published. Dimple’s daughter got scolded from her mother for the entire thing.

The success of the Luck by Chance lies in the simplicity with which Farhan Akhtar has unfolded the truth in the film industry. He is the same director who had created larger than life images in the film Don where Shahrukh Khan played the lead role.

He being a director had experience in respect of real life situations in the film industry. The film can be considered a refined commercial venture with brilliant music of Shankar Ehsaan Loy and honest disclosure of reality. The film should do well.
Posted by Souvik Chatterji at 11:37 AM