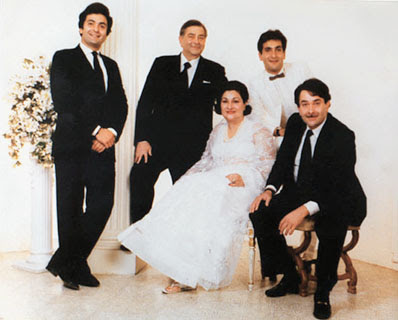 The viewers of bollywood films wish happy birthday to Randhir Kapoor on 15th February, 2009. He being the eldest son of Showman Raj Kapoor and grandson of Prithviraj Kapoor had great legacy to carry forward. He acted in a number of films in the 70s and later on settled down as a director and producer.

Randhir Kapoor’s film Jawani Diwani, opposite Jaya Bacchan became very successful. Randhir Kapoor played the role of reckless young generation of the early 70s. The music of RD Burman brought a new trend of songs which added attraction in the film. The other successful films of Randhir Kapoor included Rampur Ka Laxman with Rekha, Kasme Wade with Big B and Rakhee.

In the mid-70s he again acted in a film under RK Production titled Dharam Karam. He was the son of Raj Kapoor who was interchanged during his birth. Prem Nath’s son lived with Raj Kapoor while Raj Kapoor’s son lived with Prem Nath. Raj Kapoor was a noted singer in the film. Whenever he tried to teach music to his son, he never learned anything. While Randhir Kapoor picked up his tune “ek din bik jayega mati ke mor” sung by Mukesh and composed by RD Burman.

At the end of the film the identity of the two sons were unfolded and it was proved that the genetic origin determined the characteristics of human beings more than the surrounding where they were brought up. In the 80s, Randhir Kapoor added weight and after partial success in films like Chacha Bhatija, Biwi O Biwi, which switched on to direction and production of films.

Randhir Kapoor completed the incomplete project of Raj Kapoor under RK Production titled Henna. It was a cross-border love story, where the affair between Zeba Bakhtiar and Rishi Kapoor were portrayed. The manner in which Henna helped Rishi Kapoor to get back to India against all the odds made the film very interesting. The music of Ravindra Jain in the film was excellent including Lata’s songs “bedardi tere pyar me”.

Randhir Kapoor directed the film Prem Granth under RK Production with Rishi Kapoor and Madhuri Dixit in the early 90s. The film was related to their affair and the manner in which Madhuri Dixit was sexually assaulted by a person and the consequences of such crime. Shammi Kapoor, Om Puri and Anupam Kher acted well in their respective roles in the film.

Randhir Kapoor’s daughters Kareena Kapoor and Karishma Kapoor are busy acting in mainstream cinema in bollywood. The viewers expect Randhir Kapoor to continue making meaningful films under RK Production, the Banner which had nurtured the film culture in India over 60 years.
Posted by Souvik Chatterji at 4:49 PM