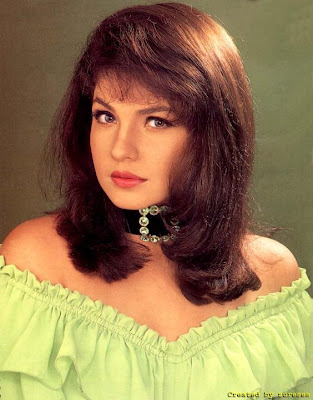 The viewers of bollywood films wish happy birthday to Pooja Bhatt on the 24th February, 2009. She had acted in successful films in the late 80s and created an identity for herself in contemporary films. Her film Daddy with Anupam Kher was critically acclaimed by the thoughtful viewers. It was based on the relationship between the father and the daughter and Pooja Bhatt displayed her relationship with Anupam Kher very well in the film.

Her film Sadak, opposite Sanjay Dutt, was probably the biggest hits in her life. The film was based on the story of a eunuch who maintained a kotha where prostitudes were employed. Sadashiv Amrapurkar played the challenging role in the film. He forcibly brought Pooja Bhatt in that brothel and compelled her to get involved in the illegal business.

Sanjay Dutt came to that place and rescued her. The songs in the film Sadak, composed by Nadeem Shravan became very successful. Sanjay Dutt fought against the men of Sadashiv and rescued Pooja Bhatt. It was a romantic story which had action sequences as well.

Pooja Bhatt also acted in the film Saatwa Aasman. She played the role of a cancer patient who loved Vivek but their affair never matured into marriage. She saw the lighter side of life and imagined things would have been better if she could live for a longer time. The songs in that film became hit as well.

Her other successful films include Zakhm, Dil Ne Phir Yaad Kiya. In Zakhm, Ajay Devgan acted very well opposite Pooja Bhatt. In the mid-90s Pooja Bhatt faded away from the bollywood industry. She later directed films on challenging subjects.

Her film Tamanna with Paresh Rawal was critically acclaimed by the intellectual audience. The viewers expect Pooja Bhatt to contribute in bollywood films both as a director and actress in future.
Posted by Souvik Chatterji at 2:53 PM