Films like Tumko Na Bhool Payenge did not get the respose they deserved. 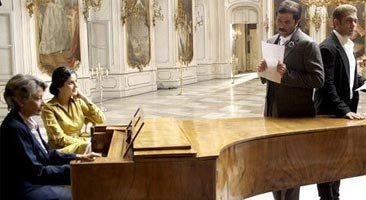 Films like Tumko Na Bhool Payenge did not get the response they deserved.

Films like Tumko Na Bhool Payenge, did not get the response that they deserved. The film was released few years back. Salman Khan, Sushmita Sen and Diya Mirza played the major roles in the film.

The film had all the elements of entertainment including action, romance and comedy. Yet with its innovative storyline the film did mediocre business. May be the tastes of viewers in the last few years had become unpredictable.

Salman Khan was a good shooter in the film. He and his friend were used by the Home Minister of Maharashtra in relation to a killing operation in the state. But Salman Khan was shot at that time and he drowned in water and was rescued by another family. Sushmita Sen was supposed to marry Salman Khan but the situation totally changed after Salman was shot.

When Salman Khan was rescued he lost his memory and forgot all the events of his past life. Diya Mirza and Rajpal Yadav tried their best in telling false stories about his past. His marriage was fixed with Diya Mirza. His parents lost their own son played by Arbaaz Khan who sacrificed his life in Cargill War.

His parents were very happy to accept Salman Khan as their son. They ever wanted Salman Khan remember his past and continued to tell him that he was their only son. Salman Khan was even shown to a witch doctor in the village played by Johnny Lever.

All of a sudden during an encounter in the village when Salman’s father was beaten up, Salman Khan had intervened. At that time the real story relating to his past life was unfolded. He left for Bombay to know his identity and save his brother.

When he went to Bombay he found that his friend had married Sushmita Sen and the friend was responsible for the injury that he had suffered. He found out his contacts and took revenge against him. In the process Sushmita Sen died after she tried to save Salman Khan.

The music in the film was very impressive which included hit songs of Sonu Nigam like “tumko bhula na payenge”, “kya hua tujhe”, etc. Sushmita Sen and Diya Mirza gave able lips in the songs that were picturized on them.

In the last few years, there has been a tradition that only comedy films did good business in India. That was the reason why Tumko Na Bhool Payenge failed to do adequate business. Instead of persisting on any one type of subject matter, the viewers should liberally watch every type of film. As long as the storyline, the acting, the direction is good, the films should not suffer at box-office.
Posted by Souvik Chatterji at 2:39 PM

Salman Khan had bern a bit unlucky in the last few years. Some of his films like Tumko Na Bhool Payenge, Yuvvraaj did not succeed in box-office inspite of having good story line.
Souvik Chatterji.