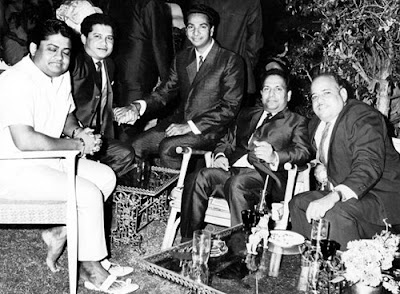 There is a big debate about who dominated bollywood music in the 70s, was it Laxmikant Pyarellal or was it RD Burman? Before dealing with the debate a brief introduction is necessary about the status of composers in the early 70s. Composers like Jaikishan, Roshan, Madanmohan, SD Burman, died in the late 60s or early 70s. Composers like OP Nayyar, Salil Choudhury, Naushad, Vasant Desai, Ghulam Mohammad, C. Ramchandran either left films or faded away from the industry.

So there was three-fold competition between RD Burman, LP and Kalyanji Anandji. Some of the films of KA were hits, others received critical acclaimation. There major films included Dev Anand’s Johnny Mera Naam, Dilip Kumar’s Gopi, Big B’s Zanjeer, Don, Muqaddar Ka Sikandar, Firoz Khan’s Dharmatma, to name a few. But the young actors were inclined to both LP and RD Burman.

The other factor that counted in the industry was that Kishore Kumar created a big competition for Mohammad Rafi who dominated bollywood films in the 60s and 70s. Firstly Rajesh Khanna’s films had the music of both RD Burman and LP. On one hand RD Burman’s music in films like Kati Patang, Amar Prem, Mere Jeevan Saathi, Aap Ki Kasam, stormed bollywood, on the other hand LP contributed with his music in Rajesh Khanna’s films like Aan Milo Sajna, Roti, Hathi Mere Saathi, etc.

With the appearance of Rishi Kapoor in bollywood films again musical films got predominance in the mid-70s. On one hand LP introduced new singers in the industry like Shailendra Singh and created a partnership with Rishi Kapoor which started with Bobby and went on in films like Badalte Rishte, Sargam, Karz, Amar Akbar Anthony, etc. RD Burman also contributed heavily in Rishi Kapoor’s films like Khel Khel Me, Zamane Ko Dikhana Hai, Hum Kisi Se Kum Nahi, to name a few. Very significantly both Rafi and Kishore were used by RD and LP successfully.

It is difficult to infer who actually had an edge in music composition in bollywood films in the 70s, whether RD Burman or LP, it can be said that RD Burman had gained popularity many years after his death as many of his songs are still sung by modern bollywood singers like Kumar Shanu, Abhijeet, Vinod Rathod, Babul Supriyo, who had imitated Kishore Kumar to create their fanbase in bollywood. LP was only used by the industry for more than 35 years, and just like Shankar Jaikishan, always had remained unwept, unsung, unlamented, unrecognized.
Posted by Souvik Chatterji at 10:49 AM

Well, good article... in my opinion, R.D. Burman had an edge over L-P in 70s, though L-P too had done a great job, but in quality RD was supreme, RD had a best albums from every genre,in that deacde, when compared to his peers

LPs music appealed to the masses but always sounded rural. RD on the other hand had a modern and futuristic feel.

Almost all heros took RD for their home productions or launching their sons.

RD lost out to LP only because of his being too simple as a human being. His PR was poor as he was an artist and not a businessman.

On music front LP was a maruti brand and RD a mercedes.