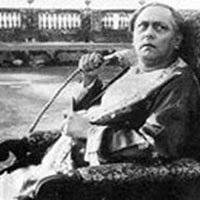 Chabi Biswas, the greatest actor of Bengali cinema had shaped the destiny of renowned directors of the golden age including Satyajit Ray, Hritwik Ghatak, Tapan Sinha and others. Ajoy Kar learned photography from abroad and used the talents of the leading actors and actresses of celluloid with style.

Ajoy Kar had a great admiration for the legendary actor Chabi Biswas whose dignified appearance created a special dimension in silver screen. In Ajoy Kar’s epic film Saptapadi, Chabi Biswas played the role of the father of the central character Krishnendu Mukherjee that was played by Uttam Kumar. Uttam Kumar entered into an affair with Rina Brown, an Anglo Indian Christian character played by Suchitra Sen in the film.

Ajoy Kar displayed the social barriers that were led down in the marriage between two communities during the age of orthodox people. Chabi Biswas was an orthodox Brahmin and a devotee of Goddess Kali. He could not accept the transformation of Uttam Kumar from a Hindu to a Christian for marrying Suchitra Sen. He came to Suchitra Sen’s house and explained to her that if Uttam Kumar would have married her he would have been isolated from his family, his neighbours, the society, as a whole.

Suchitra Sen promised Chabi Biswas that she would leave Uttam Kumar and never meet him in her life. Uttam Kumar converted himself to Christian, became a doctor and never got a scope of marrying Suchitra Sen. At the end of the film when Suchitra Sen was injured due to bombing during second world war, Uttam Kumar while treating her, showed the letter written by Chabi Biswas where he realized that the way she sacrificed her life it was possible only from a noble soul and the criteria of good or bad lied in human soul, not religion, or caste, or creed, which were created by human being.

The astounding personality of Chabi Biswas converted the romantic film into a cine-classic which has been displayed a number of times in Film Institute in Pune, where Ajoy Kar trained young directors during the 70s, in the art of film making. It was one of the greatest blockbusters and remains one of the greatest Bengali films ever made by any director.

Whenever Chabi Biswas played any memorable character, the character was memorized by the audience for generations. It happened in Ajoy Kar’s film Suno Boro Nari.

Chabi Biswas played the role of an eminent barrister in the film with the name of Charu Babu of the firm titled “Udashin”. He was the father of Supriya Choudhury, and asked Uttam Kumar to reach her to Giridih where she was engaged with Dipak Mukherjee, a rich industrialist.

Supriya Choudhury communicated with Uttam Kumar during the train journey from Patna to Giridih, a number of times and entered into an affair with him. Due to that relationship the marriage got hauled up and Chabi Biswas wanted Uttam Kumar to leave Giridih. He wrote a letter and disclosed his identity of a Professor of Literature who had left Kolkata and settled in Giridih due to a past relationship which could not mature into marriage. Uttam Kumar boarded a train to leave Giridih when Supriya Choudhury entered the train after abandoning all her ties with her family. But the aristocracy of Chabi Biswas was reflected all along the film. The film was based on the literature of Subodh Ghosh and the classic literature was transformed into a classic film.

The unfortunate demise of Chabi Biswas in a road accident in 1962, ended the dream combination of Chabi Biswas with Ajoy Kar, and the viewers could not see him in classic films in the following period like Sat Pake Bandha, Dutta, etc. The films should be preserved and shown in the film and television institutes of the country.
Posted by Souvik Chatterji at 9:19 AM