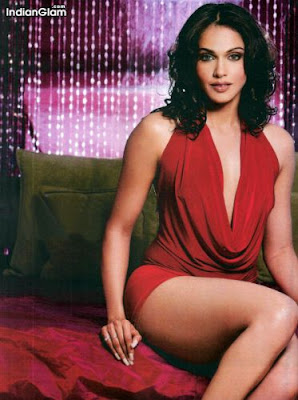 Isha Kopikaar, one of the highly talented actress and dancer of bollywood films was previously known for negative characters. Sometimes her powerful performances got overshadowed due to the prominent roles of the central characters.

In the film Maine Pyar Kyun Kiya, she got a short role of the girlfriend of Arshad Warsi, where Katrina Kaif and Sushmita Sen got prominent roles opposite Salman Khan. As the film was serio-comic in nature her performance was restricted to presentation of comedy skills only. This film was also successful along with the songs like “laga laga laga re”, “just chill chill”, etc.

She got a better role in the film Hello, at least she had more dialogues and prominent part opposite Sohail Khan, as opposed t her other characters. Salman Khan made a guest appearance for the dance sequence of the song “hello, hello, hello, hello, hello”.

From her past experiences, Isha Kopikaar had realized that even if she is successful in character roles, dance numbers, as long as she does not get a make over in positive romantic roles, her skills will remain unnoticed.

She appeared in the film Ek Vivaah Aisi Bhi, with Sonu Sood, with that intention. It was a film of Surat Barjatya, and just like other films they had been successful to address the concerns of all the family members. Every family can come to the Cinema Hall together and watch the film. The songs had been successful, and Isha Kopikaar looked beautiful in the conventional costumes. Her performance was equally appreciated.

She also acted in positive roles opposite Tushar Kapoor and Ritesh Deshmukh last year in one of the comedy films where she played the role of a Police Officer who was guided by Anupam Kher to monitor the activities of Tushar Kapoor. Her acting was appreciated by the viewers.

Isha Kopikaar is not only actress in bollywood who had acted in negative roles. Even Sushmita Sen’s character in Biwi No.1 was somewhat negative. Kajol got the filmfare award for the best villain for her performance in the film Gupt. But the difference lies in the fact that they had got many romantic roles to balance the negative character. That had not happened with Isha Kopikaar.

With the success in the film Ek Vivaah Aisa Bhi, the viewers expect Isha Kopikaar to get more positive roles in bollywood films in future and will be able to erase her image of khalas girl. She had acted in a number of South Indian films and the viewers of such films also expect better performances from Isha Kopikaar in future.
Posted by Souvik Chatterji at 12:17 PM