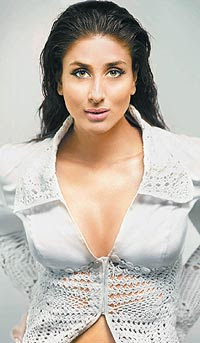 Kareena Kapoor had a different beginning in bollywood films than Karishma Kapoor, her elder sister. Kareena Kapoor started her career in the JP Dutta’s successful film Refugee, and also acted opposite leading actors like Abhishek Bacchan, Jaickie Shroff, Sunil Shetty, etc. Karishma Kapoor on the other hand had started her career with the film Prem Qaidi, which was not a famous film and also not directed under a big banner. Kareena Kapoor also had acted in successful films like Mujhe Kuch Kehna Hai, Ashoka, which were new ventures and the directors and producers had made great effort in launching the new actors and actresses in these films. Kareena also was blessed with good music in her career, with songs like “mujhe kuch kehna hai”, “rabba meri rabba”, from the film Mujhe Kuch Kehna Hai, “panchi nadiya”, “mere humsafar mere humsafar” from the film Refuge, all becoming landmark hits.

Karishma Kapoor on the other hand had to struggle in the early part of her career, and proved her callibre after performing well in Dharmesh Darshan’s romantic film Raja Hindustani opposite Amir Khan. She also won the filmfare best actress award for her performance in the film. She did well in the film Bibi No. 1 opposite Salman Khan where he was involved with Sushmita Sen and Karishma had to take the help of Anil Kapoor and Tabu to prove that she was the real housewife and Salman Khan could not have lived peacefully with Sushmita who failed to fulfil any household duties. The other successful films of Karishma Kapoor include Hum Saath Saath Hai, Fiza, Zubeida, etc. After marriage she stopped performing in bollywood films but had a successful career till now.

Kareena Kapoor had even performed in big bannered films in 2008, including Tashan, and is expected to continue the good work that she had shown in the film Jab We Met, for which she received filmfare award in the last year. Both of them being granddaughters of Raj Kapoor had a very rich acting background. Karishma Kapor and Kareena Kapoor are expected to continue to act well in the films in future.
Posted by Souvik Chatterji at 2:10 PM