Tapan Sinha was sublime in the film Safed Hathi. 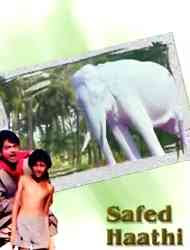 Director Tapan Sinha did an excellent job with the film Safed Hathi. He made the Hindi film in 1978 especially for children. He won the National film award for children's film in 1978.

In the film, child Ashwani and her elder sister Gayatri Sharma were orphans. They stayed with their maternal uncle Sadhu Meher and his aunty Mala Jaggi. Both ill-treated them. Vijay Anand got some money from producer Utpal Dutta and came to that place a crew to make a film hovering around the story of Aswani.

One day Ashwani was send by her aunt to give a saree to the grandmother. He travelled across the jungle. There he met a white elephant and he called it safed hathi. The elephant gave him a gold coin. He showed it to his sister. His aunt came to know about it and then started pampering him. She bought new clothes for him.

Shatughun Sinha, the king of the district, saw the white elephant and took the help of Ashwin to bring it to his place and tied it with ropes. Ashwin took the help of a bird mynah and brought all the other elephants from the forest to take back safed hathi. He showed where the gold coins were there to his aunt and uncle. Both dug the place, got the coins, but both got beaten by two poisonous snakes.

Tapan Sinha provided the message that animals should be left free to enjoy their existence and human beings should not interfere with them. The performance of Ashwin, Shatrughun Sinha, and others were excellent. The photography was excellent. Composer Ravindra Jain gave classical music and singers Hemlata and Yesudas did justice to the songs composed in the film including “utho he lal utho he”. The film should be preserved and restored.
Posted by Souvik Chatterji at 8:50 AM