Primeval had horrified everyone. 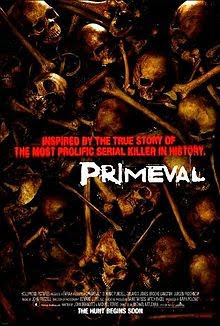 Primeval had horrified everyone.

The Hollywood film Primeval had horrified everyone. The film had been directed by Michael Katlemen and released in 2007.

The film was related to the affairs of an unknown animal staying in the African country Burundi. The unknown animal had killed many human beings in the place. Dominic Purcell, his friend Orlando Jones and Brooke Langton came from USA to Burundi to investigate the case.

At the Burundi airport, they were warned about an animal named Gustave who killed the inhabitants in the place in Burundi. They were helped by a guide Jurgen Prochnow. An artificial cage was built to catch Gustave, which failed. Orlando Jones saw the local terrorists killing a family in the village. Gabrielle Malema was one of the local inhabitants who tried to capture Gustave, but fails. He did so to attract the attention of Dominic, Orlando and Brooke who could take him to USA.

One of the guards attempted to rape Brooke, when Gustave came and killed the man. The guards were corrupt and they injured Jurgen. Gabrielle killed one of them. Dominic found Orlando’s camera. Gustave came and attacked Dominic and Brooke. They rode in a car and managed to escape.

In the last scene it was shown that Gabriel Malema, Brooke Langton and Dominic Parcell returned back to USA. But Gustave still survived and killed people. The direction of the film was excellent and the performances were also excellent.
Posted by Souvik Chatterji at 11:17 AM