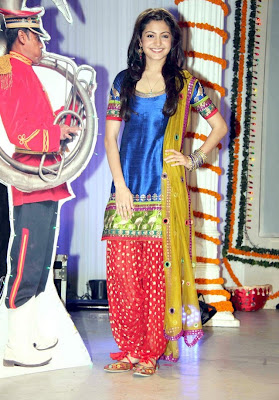 In the film Ranveer Singh and Anushka Sharma were depicted as young people of New Delhi who wanted to create their own name. Anushka Sharma wanted to avoid marriage and begetting children, so created her own company to help out marriage parties. She opened the company as joint venture with Ranveer Singh and took the responsibility of catering, decoration and ancillary activities relating to marriage.

The business flourished and they earned excellent profits. Both of them started loving each other. One day when both became intimate, Ranveer Singh realized that love should not come in between business and partnership. When he said that he was not serious about marriage, Anushka Sharma showed indifference and they ended the partnership.

Both formed their own companies and dealt with marriage related activities again. But individually the business failed. But they got reunited due to the demand of a client. Both of them danced excellently in the song “mai to awe awe awe awe lut gaya”, which became super hit.

Anushka Sharma had previously acted in other films like Rab Ne Bana Di Jodi, but her dialogues suited her the best in this film, where she reinvented herself. Ranveer Singh never looked that he was acting in his first film.

Directors and producers should experiment with the pair Ranveer Singh and Anushka Sharma again considering their immense success in the film Band Baaja Baarat.
Posted by Souvik Chatterji at 5:31 PM