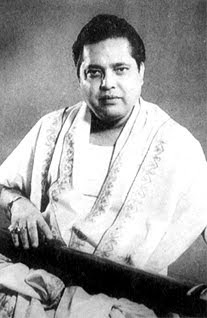 Dhanonjoy Bhattacharya was the one of the legendary classical singer of Bengal of the 50s and 60s, who showed his excellence in films songs, Bengali modern songs and shyamasangeet. He did not get the recognition he deserved as the major attention of the media was focused only towards Hemant Kumar, the romantic singer of Bengal, but along with Manobendra Mukherjee, Manna Dey, Akhilbondhu Ghosh, Satinath Mukherjee and others, Dhanonjoy’s classical touch inspired the composers to compose pure classical and semi-classical songs.

Dhanonjoy died in the early 1990s, after leaving a huge treasure of classical songs and still remains a king (samrat) in the minds of numerous music lovers in the country. His songs and works should be preserved and restored.
Posted by Souvik Chatterji at 9:50 AM

Dhananjoy Bhattacharya had remained the teacher (guru) of other noted bengali singers like Pannalal Bhattacharya, Sanat Singha and others.
Souvik Chatterji.