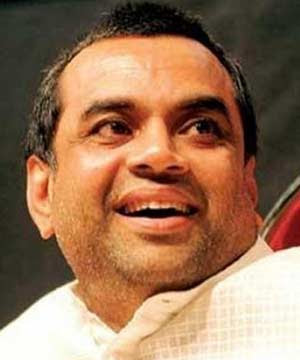 The viewers of bollywood films wish happy birthday to veteran actor Paresh Rawal on 30th May, 2011. He had proved himself to be an indispensable actor in the bollywood arena for the last 20 years.

In the late 80s and early 90s he was known for depicting serious characters like Sardar Ballabhai Patel in the film Sardar, the performance in the film Wo Chokri, etc. Then he acted in huge number of films in the role of villain, like Damini, Laadla, Mahanta, Vijeta, Samundar, etc.

From the late 90s, his talented got recognized and he started acting in central characters and serio-characters. He was sublime in the films Hera Pheri and Phir Hera Pheri. The story of both the films revolved around him and Akshay Kumar and Sunil Shetty were outcast by his brilliance. He was brilliant in Kamal Hassan’s Chachi 420. His performance was as powerful as the performances of Om Puri and Amrish Puri. In the film China Gate he showed his excellence opposite stalwant actors like Naseeruddin Shah, Om Puri, Amrish Puri and others.

During the last 10 years, most of the bollywood directors depend upon him to pull out big projects. He was excellent in the film Chup Chup Ke, with Om Puri and Shahid Kapoor. He was sublime in the role of the father of Akshay Khanna in the film Mere Baap Pehle Aap. He did a cameo in the film 36 China Town opposite Shahid Kapoor and Kareena Kapoor.

He also contributed in the comedy films Malamaal Weekly, Hero No 1, etc. The huge space in bollywood films that was created by the absence of Amrish Puri, Kader Khan and other veteran actors had been filled by Paresh Rawal.

He had received few awards for the best comedian, but he deserves more number of awards, because through his acting variation he had proved his versatility. The viewers expect him to continue the great work in 2011 and the years to come.
Posted by Souvik Chatterji at 5:18 PM

Email ThisBlogThis!Share to TwitterShare to FacebookShare to Pinterest
Labels: Paresh Rawal, Wo Chokri