Kashmakash had been a decent effort. 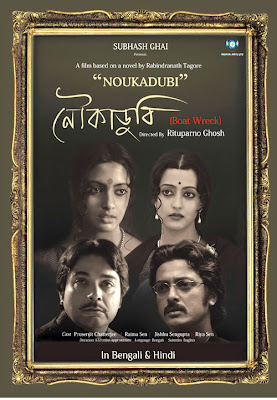 Kashmakash had been a decent effort.

Rituporno Ghosh had made a decent effort with the film Kashmakash based on Rabindranath Tagore’s literature. The film had been based on the epic story Noukadubi, a piece of literature which attracted the attention of other directors as well. Story-teller Ajoy Kar had also made the film Noukadubi in the 50s on the same piece of literature.

In the film Jishu Sengupta, who was a law student loved the talented uptown girl played by Raima Sen. Due to the insistence of his father he had to sacrifice his love and married a rustic villager played by Riya Sen. He later found out that his wife was already married to Prasenjit Chatterji and was separated from her wife after a boat accident. The story hovers around the theme whether Jishu Sengupta would have reunited Riya Sen to her husband Prasenjit Chatterji or not.

Rituporno Ghosh had made a hindi film and it had been a challenge in doing justice with Tagore literature. The story had been read a big section of readers. One of the achievements of Rituporno Ghosh had been the credit of utilizing Raima Sen and Riya Sen in the respective roles. Although Raima Sen had previously done off-beat roles, Riya Sen had done the role of the rustic villager the first time.

There was hardly any make up given to Riya Sen. Her speech had also been soft and folk-based where she did a commendable job. Jishu Sengupta and Prasenjit Chatterji had previously acted in these types of roles so also showed a refined approach. The effort of Rituporno Ghosh had been a decent effort.

The film should get good response and the viewers should appreciate the effort of a director to do a period film based on the life of bengalies more than 70 years back. Viewers should watch the film.
Posted by Souvik Chatterji at 12:57 PM