Knock Out got a positive response. 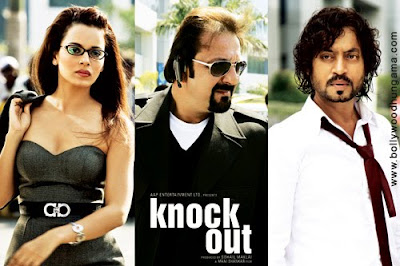 Knock Out got a positive response.

Director Mani Shankar’s film Knock had got a very positive stream of responses. The viewers had accepted the film. The film had been produced by Sohail Maklai. The starcast of the film of Sanjay Dutt, Kangana Ranaut and Irfan Khan had drawn the audience from their houses.

The film received plagiarism charges in respect of having similarity with the film Phone Booth. Sanjay Dutt called up Irfan Khan in the telephone booth and compelled him to stay there and listen up otherwise he would have shot Rukhsaar. A drug addict was shot and killed by the caller in open street.

Sanjay Dutt and Irfan Khan were brilliant in the film. Gulshan Grover played his role as a corrupted politician in style. Kangana Ranaut acted well in the role of the journalist. The music of the film is mediocre. But the film being a prima-facie action film, so music does not play that important role in the film.

Sanjay Dutt should be happy with the response of the film, because he is going to have a big release coming up that Is Munnabhai Chale America. Viewers should watch the film.
Posted by Souvik-indrajalik at 8:46 AM