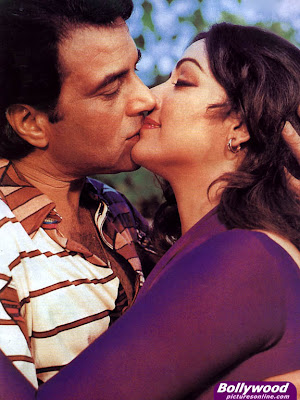 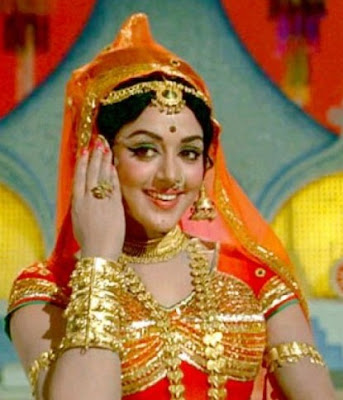 Within short time she formed a brilliant combination with Dharmender and their films started rocking bollywood in the 70s. The pair started off with films like Naya Zamana, Raja Jani and went on to give all time hits like Seeta Aur Geeta, Jugnu, Charas, Sholay, etc. If Sholay is remembered for superlative camerawork of Ramesh Sippy, villainish andaz of Amzad Khan, angry image of Big B, then it is also remembered for tremendous dance performance of Hema Malini. She danced on top of glasses in the song “jab tak hai jaan”. Besides she showed her bravery also in the film by riding on the horse-cart against the gang of dacoits of Gabbar Singh.

Hema Malini did extremely well in off-beat films as well. One of her landmark films included Kinara opposite Jeetender and Dharmender. Gulzar’s films was based on dancing and Hema Malini’s classical dance balanced the story line where Jeetender’s car struck Dharmender and killed him on the spot. Dharmender was the husband of Hema Malini in the film and she lived with his memory in the film.

Hema Malini’s films opposite Big B also did great business. Some of their hit films included Desh Premi, Satte Pe Satta, etc. In the last few years Hema Malini had been seen contributing in character roles in bollywood films like Baghban. She must be proud about the success of her daughter Esha Deol, but is respect of glamour and beauty and dancing skills still Hema Malini is remembered for her dominance during the 70s.

The viewers still believe that a lot of dancing skills are still left in Hema Malini and she should still act in bollywood films in future.
Posted by Souvik Chatterji at 8:44 AM