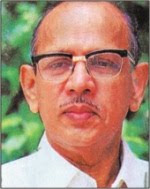 Whenever the reference is made relating to pure classical songs the names of glamourous Bengali classical singers like Manna Dey, Manobendra Mukherjee or Dhananjoy Bhattacharya come at the summit. But there were other classical singers like Satinath Mukherjee who was an institution by himself during the golden age of music, that is the 50s and 60s and his basic discs relating to different ragas require special mention.

Although his basic discs of modern songs like “pashaner buke likhona amar naam” or “bonopotho majhe”, or “baluka belai kurai jhinuk”, etc. As Satinath Mukherjee’s contribution in Bengali films was not as significant as Manna Dey, Manobendra Mukherjee, Hemanta Mukherjee or Shyamal Mitra, his recognition was adequate to his talent.

But Satinath Mukherjee’ s name will always glitter as gold if the history of Bengali classical songs are referred. His songs and compositions should be preserved and restored.
Posted by Souvik Chatterji at 9:00 AM