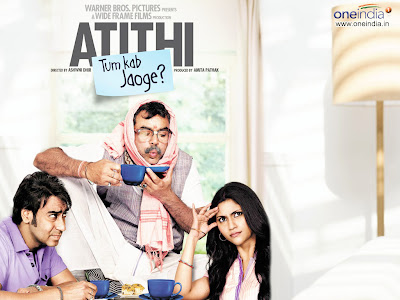 The film Atithi Tum Kab Jayoge, does not have anything new other than the brilliant performance of Paresh Rawal. There has been a mindset of most of the directors these days that the moment they make a comedy film it will automatically be hit. There is no basis of this mindset. If in 2009, All The Best did great business, Do Not Disturb and De Dana Dan flopped.

But the appearance of Paresh Rawal in their house created the maximum amount of displeasure. He mentioned that he was a distant relative of the family and come from village. But the period of time for which promised to stay passed away. He never decided to leave the house.

He created annoyance of every type for the family. Ajay Devgan and Konkona Sen Sharma had tried every type of ploy to compel Paresh Rawal to leave the house. But he was adamant enough to act on their ploy. The character artists like Ritesh Deshmukh, Sanjay Mishra, Pradeep Rawat, Satish Kaushik did well in their respective roles.

The music had been composed by Pritam. The song “dohe” sung by Amit Misra and “aaja aaja” sung by Pritam had been popular. The other song “joti jalaile” sung by Vishal Bharatdwaj was not bad. But the film does not have the masala with which viewers can be drawn in to the cinema halls or persuaded to sit in the halls for three hours.

The acting of Paresh Rawal and Konkona Sen Sharma had been fine. The best part of Paresh Rawal lied in asking Viju Khote during a film shooting to repeat his dialogue of Sholay titled “kitne aadmi the”. He got fed up saying do. The simplicity of Paresh Rawal in the respective role made people laugh. Ultimately the set that was created in the shooting site was destroyed because the director asked them to blast it when he said two and Viju Khote said do.

The film did mediocre business in 2010 and it was more than enough for the director and producer.
Posted by Souvik Chatterji at 5:39 PM