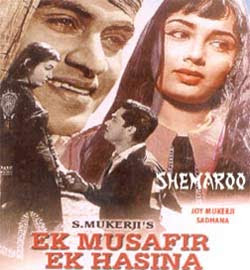 Born in 1925 and died in 1991, Raj Khosla was considered by critics to be the path-breaker in crime-thriller films. His film CID in 1955, created a trend in respect of crime thrillers. He introduced Wahida Rehman and Shakila in the film. The music of the film composed by OP Nayyar was also impressive with hit songs of Rafi like “ankhon hi ankho me ishara ho gaya”, “leke pehla pehla pyar”, etc.

His film Solwa Sal, involved Wahida Rehman being eloped by her boyfriend but later on brought back home by a journalist. In Bombai Ka Babu, there was a killer who entered into the family of the person he killed and then had an affair with the sister of the deceased. Dev Anand and Suchitra Sen played the lead roles in the film.

The 60s saw Raj Khosla’s musical blockbusters. His film Ek Musafir Ek Haseena with Joy Mukherjee and Sadhna stormed bollywood. The songs composed by OP Nayyar for Rafi and Asha were super hit including “bahut shukriya bari meherbani”, “aap yuhi agar”, “hume dekhakar aapka muskurana”, etc. The shooting in Kashmir also raised interest in the minds of the viewers. In 1964, Raj Khosla came up with probably one of the greatest spooky films in bollywood, with the title “Woh Kaun Thi”. Sadhna played the roles of the two sisters who were exploited by Prem Chopra to terrorize Manoj Kumar and get his property. At the end of the film the secret was revealed. The music composed by Madan Mohan was brilliant with landmark songs like “naina barse”, “lagja gale”, etc.

Raj Khosla continued with horror films with Mera Saya and Anita where Sadhna played the role of the ghosts. Sunil Dutt acted opposite Sadhna in Mera Saya while Manoj Kumar acted opposite her in Anita. The music was impressive again.

In the mid-60s Raj Khosla again returned back to romantic dramas like Do Badan with Manoj Kumar and Asha Parekh. The music of Ravi with impressive songs like “jab chali thandi hawa”, require special mention. He also made films related to stories of dacoits like Mera Gaon Mera Desh with Dharmender. His last successful film included Mai Tulsi Tere Angan Ki. Both Nutan and Asha Parekh did well in their respective roles in the films. His other films like Do Badan and Dostana were impressive, but whenever the viewers remember the name of Raj Khosla, the first impressive comes in respect of horror stories and crime thrillers like Mera Saya and Who Kaun Thi. The films should be preserved and restored.
Posted by Souvik-indrajalik at 5:31 PM