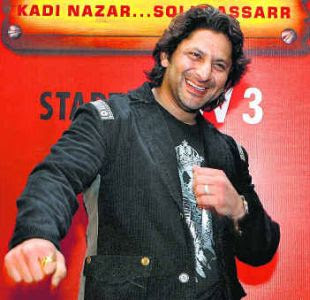 Arshad Warsi had come up with his first production Hum Tum Aur Ghost. The film had been directed by Kabir Kaushik. There is lot of expectation on Arshad Warsi after his film Ishqiya opposite Vidya Balan and Naseeruddin Shahin the early part of the year had become hit.

The rest of the film hovered around the theme of helping the three characters. The innovative part of the story is related to that issue. The music of the film had been composed by Shankar Ehsaan Loy.

Arshad Warsi, Dia Mirza and Boman Irani played their roles to perfection. But the film does not have that amount of twists and turns which can make the audience sit in the auditoriums and halls for more than three hours.
The film should do average business.
Posted by Souvik Chatterji at 8:33 AM