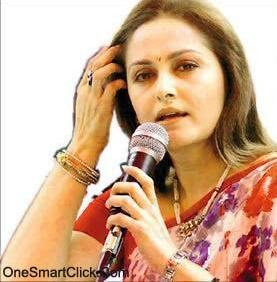 In the late 70s her film Sargam opposite Rishi Kapoor became superhit with a brilliant story and excellent songs. She played the role of a deaf and dumb girl who had immense dancing callibre which was unearthed by Rishi Kapoor in the film.

The music composed by LP was brilliant by every musical standard and Lata and Rafi were sublime in the songs “dafliwale dafli baja”, “koel boli”, “ramjiki nikli sawari”, etc. In an age of action pact films of Big B, Vinod Khanna, Sargam being a romantic film with Rishi Kapoor and Jaya Prada did excellent business.

From that time Jaya Prada became the no. 1 bollywood actress and acted opposite all the leading stars of bollywood. Her other superhit films include Sharabi, opposite Big B, Akhree Rasta opposite Big B, Kamchor opposite Rakesh Roshan, to name a few.

She acted in a number of films opposite Jeetender as well and all of those films were successful. At that time she got stiff competition from Sri Devi, another South Indian actress who had both acting talent and dancing talent. The films where both of them acted together, the viewers were confused to choose between the two. In Akhree Rasta Jaya Prada did equally well like Sri Devi.

In the 90s, also Jay Prada’s films especially opposite Big B did good business, like Indrajeet or Aaj Ka Arjun. In those films while Big B concentrated on action sequences, Jaya Prada played the romantic part to perfection. With the emergence of new actresses in bollywood films in the 90s like Madhuri Dixit and Juhi Chawla, Jaya Prada faded away from the bollywood industry.

She joined politics and had been the parliamentarian for more than a decade. Besides she had played important roles in tamil films and other South Indian films over the years.

In 2010, she had been expelled from the Samajwadi Party by Mulayam Singh Yadav along with other primary members. That can give her some time to devote in bollywood films as well. The viewers expect her to make a comeback in bollywood films in character roles as many of them feel that she still has a lot of acting left in her.
Posted by Souvik Chatterji at 1:19 PM